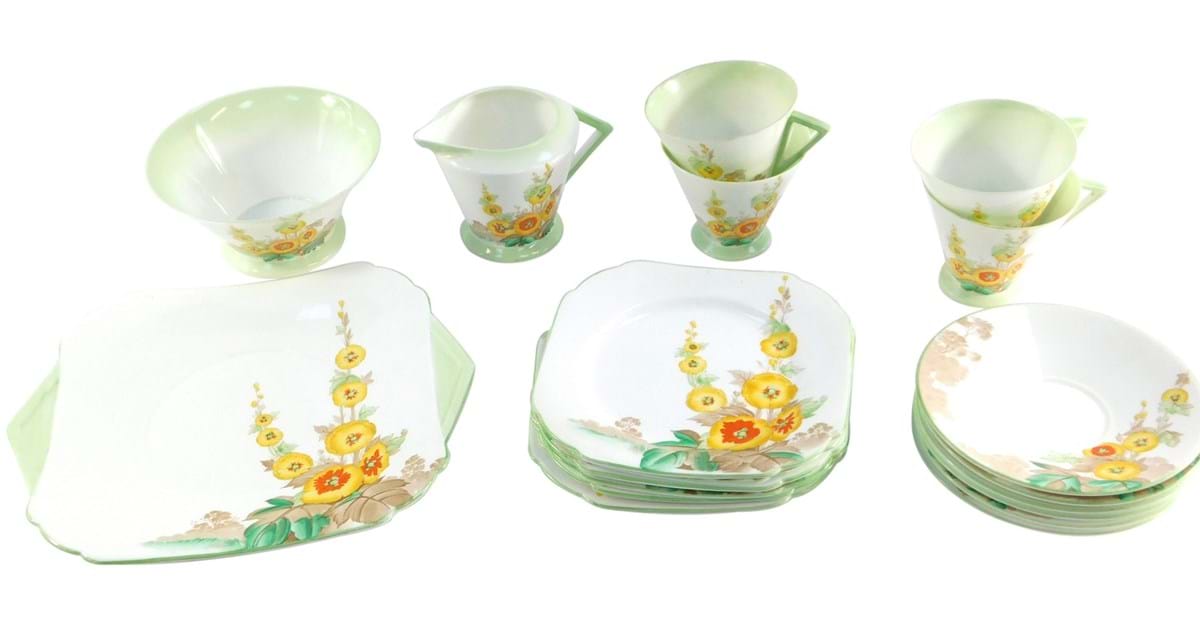 It would be quite a unique proposition if I were to be discussing a lovely lady in this article but, mindful of the words of Alexander Pope, I would be a fool to rush in where angels fear to tread. No, instead I am delighted to be writing about a much safer and certain subject; Shelley porcelain

A Shelley porcelain part tea service decorated in the Hollyhock pattern, sold for £200 at Bourne. (imaged above)

Shelley had modest beginnings as a small Staffordshire factory called Wileman & Co in 1872, and subsequently traded alongside this name as the Foley Potteries, and later Foley Wileman. Modest tea and dinner wares, with unsophisticated and unprepossessing transfer decoration, were sold aimed at the new disposable incomes of the lower middle classes, and graced parlour cabinets up and down the land. Alongside these wares, in 1896, Frederick Rhead was brought in as Arts Director to improve the reputation of the company and introduce innovation and new decorative flair. Consequently Intarsio and other wares raised the company’s game and brought new retail opportunities, not least Liberty of Regent Street.

However, it was in the lead up to the Great War, and subsequently, that Percy Shelley, who had taken over the company in 1896, developed the table wares for which Shelley, as it was known from 1925, became renowned. 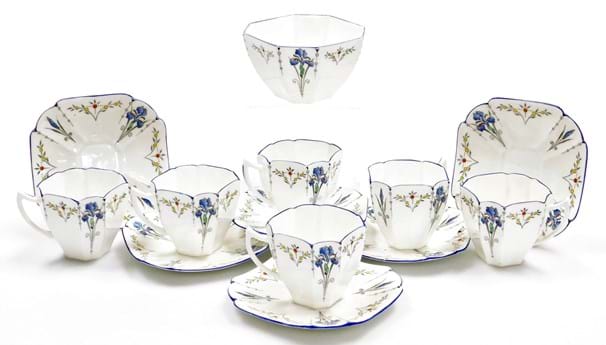 Considerable investment was made in designers and modellers, modernising the works and offices, and introducing a three storey saleroom, which was the envy of its competitors. As the world had changed following the Great War, so Shelly developed many new wares, some utilitarian like jelly moulds, and some fun like nursery wares designed by Mabel Lucie Attwell and others. However, it was for their porcelain table wares, that Shelley had their greatest and most enduring success.

Throughout the 20’s and 30’s Shelley, whilst producing traditional shapes, introduced a la mode shapes. Strongly and definitively Art Deco shapes like Vogue, Mode, Eve and Queen Anne, with their triangular handles, sat alongside more traditional, but respected shapes, such as Cambridge, Dainty and Regent. Patterns were often equally striking and collectors look keenly for Sunrise, Butterfly Wing and Red Blocks pattern, alongside more traditional chintz, floral and cottage patterns. 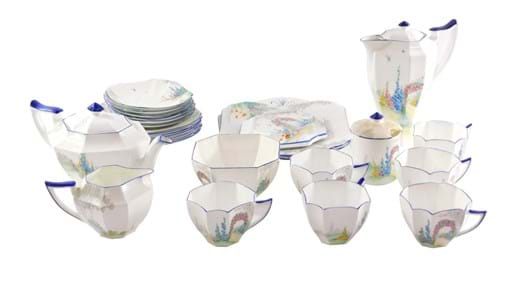 A Shelley porcelain tea service decorated in the Archway of Roses pattern, sold for £600.

Just as one world war heralded the strongest period of Shelley’s history, so the Second World War and subsequent changes in industrialisation and mass production heralded the company’s eventual decline, alongside many other smaller factories. Despite continued attempted innovation Shelley finally shut its doors in 1966, and its buildings were subsequently demolished. However, its appeal has continued to endure, even strengthen, as 20tth Century porcelain collectors vie with interior design enthusiasts for examples of this factory’s wares. The decline of the High Street, enthusiasm for on-line buying, and the pursuit of the unique, can only ensure that Shelley endures for many years to come.