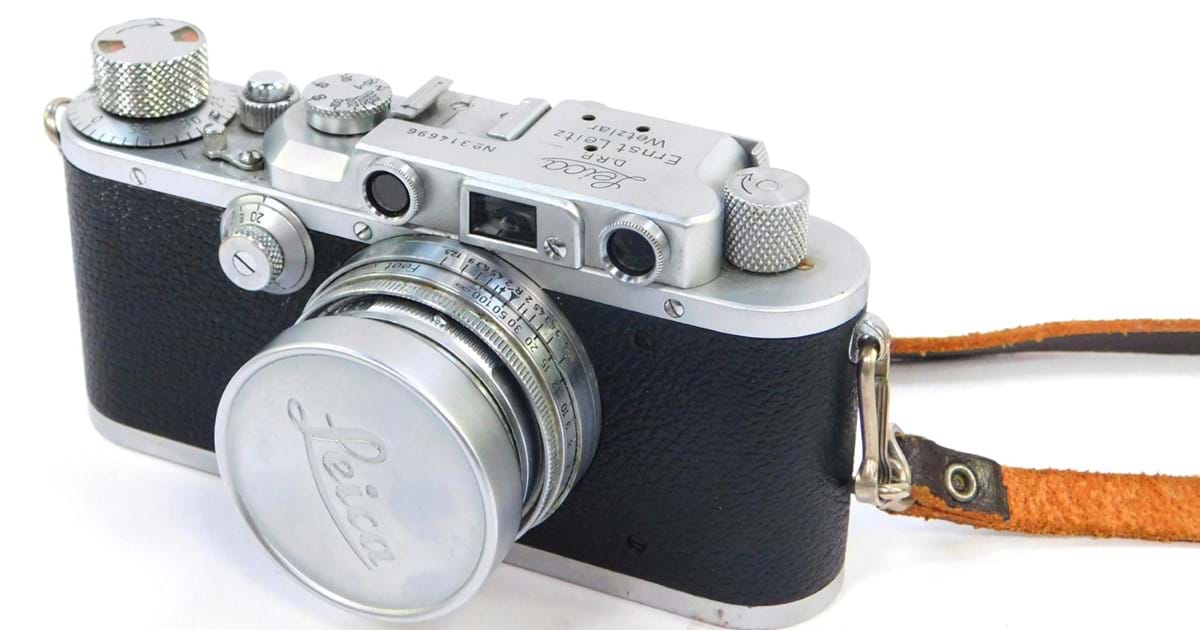 People associate collecting with names. There is little getting away from the fact that a Lowry print signed by the great man and once touched by the great man would stand proud on the wall of an upwardly mobile central London flat more than an identical unsigned print or a picture by an artist of less repute.

Purchasers of such items don’t beckon their guests to look at their new print, instead they place emphasis on ‘glancing at my Lowry’. Chose a collecting field and a name crops up which tantalises buyers into purchase, who are often buying the name rather than the object. We like prestige, we are seduced and mystified by Picasso, or the Martin Brothers, buyers dig deeper if the card case is by Nathaniel Mills, or scour the internet for not just any handbag, but a Louis Vuitton handbag.

Camera collecting is no different and the buzz name, the maker that sends collectors that extra yard, or to loan that bit extra to own an example is the name Leica.

A name will often be enough to illustrate a product, The Rolls Royce of cars, The Ralph Wood of pottery, The Leica of cameras and who do we have to thank for this mastery, for the comfort this name brings? Well it is the German master Ernst Leitz and the name Leica was not officially used until 1986 and followed a rich tapestry of production from this master of optics.

The company was founded way back in 1869 in Wetzlar. Cameras were produced in number but it was only through the design and brilliance of Oskar Barnack that the company took off and through his prototype 35 mm cameras first seen in 1913 Leitz became a household name.

A combination of hard work and design brilliance led to these optical gems becoming Holy Grail pieces from use on the battlefield to the home whether a camera, a pair of binoculars or any manner of scientific instrument, Leitz and Leica are the names people associate with quality, good craftsmanship and laterally collectability.

They were the first cameras to use 35mm film and by the Leipzig Fair of 1925 when the Leica I with its focal plain shutter was introduced they had become a household name.

By 1952 Leitz had opened up production in Ontario, The Leica II and III became highly sought after as cameras of prestige and quality and later on the famed Walter Mandler had introduced computer aided design to the cameras in the 1970s.

After moving to Solms, the company now known as Leica returned to Leitz Park in Wetzlar and boast scores of famed users from Henri Cartier-Bresson to Sebastiao Salgado.

It is fair to say the collecting field for cameras in general and especially Leitz and Leica is as strong as ever. The design, quality and craftsmanship all appeal leading to huge prices. Anything military related and early is sought after, so look for the crow’s foot mark on any piece. A 1923 example produced $2.8m when selling in Austria recently, but the example illustrated made £280 and represents a sound investment.

The collecting area of cameras is a minefield, with condition, rarity and provenance all playing key parts in determining desirability. Luckily Golding Young is blessed with many experts in this complex field and we would be only too happy to help if you come across one of these design classics in the attic.