A 19th Century Sevres porcelain cup and saucer was brought into the Lincoln Auction Rooms during one of our weekly Friday valuation mornings. 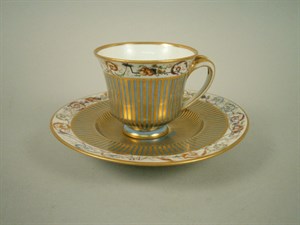 Sevres, now a French state-owned company was formed in the early 18th Century under the patronage of royalty. They managed to stay at the forefront of European porcelain production despite the tumultuous times that took place in the French political structure in the latter half of the century which culminated in the French Revolution.

This particular piece is marked 'RF' which shows it was produced after the French Revolution period of 1789-1799.