The eccentricities involved when it comes to collecting never cease to amaze. Museums constantly crop up with single owner collections or unusual items and whether it be pencils in Keswick or lawnmowers in Southport (not to mention the single subject matter of a certain museum in Amsterdam and no I don't mean Van Gogh) - it is always the unusual, quirky and off the wall item which creates the most interest.

The auction at the Grantham Auction Rooms on November 5th has one such collectable area …. typewriters. A single private collection formed over twenty years graces the auction on Wednesday - and the examples in the sale certainly open a few eyes as to the differences in design and changes made to what can be perceived as a simple day-to-day item.

The collection commencing at lot 500 comprises of 40 lots showing the great many differences in this particular field. The daddy of them all - the Columbia Type 2, from around 1890 - makes an appearance and looking at it one can see how the design has changed greatly from this 19th century example to those we see today. 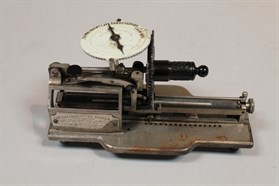 This is quite simply a great example of engineering from over 100 years ago. A functioning, historically important item years before its time is here, amongst other examples from Corona, to Bijou, Yost, Empire and D&M, every style and period from the very beginning of production to the 1960s can be seen. Prices range from £20 for the modest examples to around £1500 for the Columbia.

Who buys such things? Who wants an antiquated item in an age of Internet and laptops? Well these are design classics, talking points; buy one, put it on your coffee table and start a conversation! They are all in relatively good order with beautiful craftsmanship in many cases - and are becoming rare. Collectors and academics can be found all around the world. Germany and America house the lion's share - and interest is vast, especially across the Atlantic, where prices for the earliest examples are steadily rising. 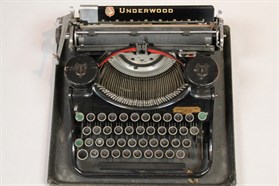 Quirky, unusual, compact are all buzz words which are key to collecting anything now - the items that people want and the items going up most in value are collectables. Typewriters are collectable AND usable - the perfect combination! The quirkiest of them all is one of the more run of the mill examples. A typewriter of World War II period is not the rarest example you'll see; it has a carrying case ready to go - except for a large hole in the case which has penetrated the keys in areas. This is said to be a bullet mark which hit the typewriter and saved the life of the recipient - a wonderful story and a genuine piece of history. 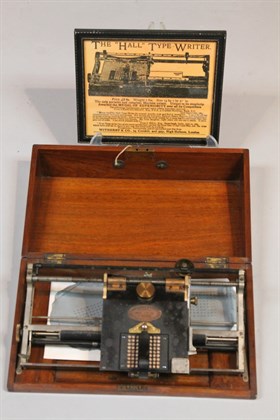 The sale is Wednesday 5th November at 10am, viewing Tuesday 4th November 10am - 4 pm and from the morning of the sale at 8:30 am. There are over 850 lots including furniture, silver, pottery, pictures and collectables - the mix is good and the quality is high, so the short (typed) answer is …. come and buy!!!!