A gold replica of a Viking brooch, which was found in Scunthorpe as part of a treasure hunt, will be auctioned at The Lincoln Auction Rooms in the next sale on March 15th, 2017. 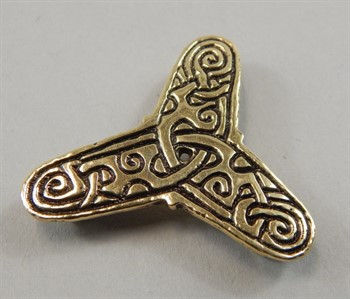 The artwork was one of five tokens created by artist Luke Jerram for his installation ‘Treasured City’. The tokens, which were each valued for insurance at between £2,500 and £4,500 when they were made, were concealed in locations across Scunthorpe and North Lincolnshire, with the clues to their whereabouts hidden in paintings in the 20-21 Arts Centre in the town.

The first treasure, found by a Grimsby woman on a lucky hunch, was the Viking brooch which was discovered in a wall in Scunthorpe’s Kingsway Gardens.

Auctioneer John Leatt said: “We are delighted to be offering this brooch for sale in our next auction. It was a stroke of luck that the vendor found the piece on a hunch rather than by solving the puzzle in the picture and now she wants to sell it to raise money for a holiday.

“We expect there will be a great deal of interest in the piece and have estimated it may well sell to a collector for between £1,200 and £1,500. The auction will be the test of the original quoted valuations.”

The vendor, who has asked not to be named, found the gold piece in a dry stone wall near a flag in the gardens. Moments later, a scoutmaster, who had cracked the code in the painting, arrived at the park to find the treasure had already been claimed.

Since the treasure hunt began in February, four artworks have been found. The second object, a gold lamb, was found in a bandstand in Brigg, and the third piece, a model of a Tudor fisherwoman, was found at Normanby Hall. The fourth item, a golden train, was found at the base of a sapling in a hedge in Scunthorpe’s Central Park.

Each piece was modelled on artefacts in the North Lincolnshire Museum and it is believed that the final clue could take months or even years to crack. All the clues were created by mathematician and code-setter Dan Fretwell.

Also included in the Collective Sale of just under 1300 lots is a large collection of clocks, watches, clock parts and tools. Consigned from a local deceased estate, the collection covering a number of areas of horology from 18th Century longcase clocks to a modern Omega Limited Edition James Bond 007 wristwatch, complete with paperwork and box. Jewellery, silver and gold coins also feature strongly within the sale, with a number of gold sovereigns entered.

The sale will also give buyers and sellers the opportunity to see our newly expanded saleroom space. Primarily it will be used as a display area for antique furniture, but it also will be a flexible space for exhibitions and other projects.