The Grantham Asian Art and Collective Auction on Wednesday, 3rd June contains a quite remarkable medal group. As usual the casual first glance may prove disappointing. The purist medal collector will see whilst scanning lot 31 a number of more common World War I medals – a Star, a Campaign Medal, a couple of Victory medals. But as usual the interest comes from the detail.

The medals are awarded to three brothers, all serving officers of varying rank during the most awful of conflicts. Hollywood films have repeated such tales but the scriptwriters would hardly be believed if they tried to comment on a real story of three brothers all fighting in the same conflict.

The soapbox, political section appears now so brace yourself; my personal thoughts are it is unfair to dismiss any medal group. Putting them up for sale and having them in an hierarchical financial order is wrong - the bravery of these men and women is unquestionable. Medal groups of all types need cherishing and it is perhaps one of the more heartbreaking moments of our job when such things come in for auction. It shouldn’t matter that these things hold value in monetary terms – what they teach us and what they hold sentimentally should be enough and it becomes rather sad when such things turn up for sale. However, when they do they create interest and if they are going to be forgotten in the backs of drawers it is perhaps only right that they should be sold to people who actually want them and will cherish them. 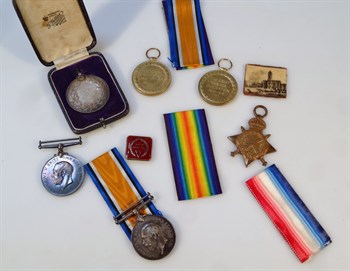 Now to the items themselves. They are modest in award, nothing particularly rare as such other than the three names. Two brothers fighting is rare, three becomes very scarce. We have G Adams, C E Adams and J Adams; they were part of differing regiments from the Royal Artillery, Leicester and East Yorks. One brother rose to the rank of General and each family member appeared to have successful war careers. They are to be sold with part boxes, an extra silver infantry medal and various ribbons.

That most difficult and not always appropriate point of price now enters the equation – what are they worth? It is very difficult to say and purchasing proper individual history is difficult to value. We would suggest figures of £150 - £300 but they are here to sell – how much the price of ownership for a piece of real life, poignant history? Not a lot in my book.