Sampler found in attic returns to school where it was made

A Victorian sampler destined for the tip after being found in an attic will return to the school where it was made nearly 140 years ago.

The framed sampler, made in 1871 by 11-year-old Coleby School pupil Jane Newman, went under the auctioneer's hammer at Thomas Mawer and Son of Portland Street on Saturday (December 5). It was bought by several staff, governors and parents who clubbed together to bring it back to the school.

Auctioneer John Leatt said: "We had interest in the sampler from several local buyers on sale day, but it was finally bought by a commission bid left on the book for £160, just over its top estimate.

"We are delighted that it will now be returned to Coleby School for future generations of children to enjoy."

The sampler had been found by Gareth Bailey (37) when he cleared the loft of his new house in Bracebridge Heath, Lincoln.

Mr Bailey, who moved into the house in September with his wife Amelia (40) and their six-month-old daughter Tilly, said: "When we bought the house lots of rubbish had been left in the garage, garden and loft. I cleared six tea chests, lots of rolls of carpets and beer bottles from the attic when I came across the sampler and thought it was rubbish too.

"I was taking it to the tip when my mother-in-law stopped me and said it might be worth something. I'm pleased I didn't throw it away now."

He added: "I think it's really great that the sampler has stayed in the county and gone back to where it came from. It will be great for the children to see such a piece of history." 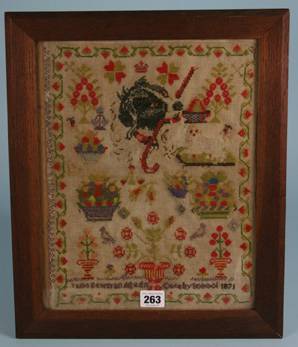 Although some of the stitching on the sampler was unclear, the auctioneers believed it had been made by Jane Newman and appealed for local families to come forward with information about its origins.

After the story appeared in a local newspaper, a historian from Coleby, Chrys Marriott, wrote to the auction house stating: 'The Newmans lived in Coleby from the end of the 18th century to the mid-20th century. The 1871 Census lists Jane Newman living in Blind Lane with her parents Robert and Sophia and three sisters. Robert was a farm worker. The Lincolnshire Archives holds a 19th century examination schedule from the school which shows Jane was a pupil there.

'The story has a sad ending because Jane died in 1872 aged 12, a year after she made the sampler.'

Headteacher at Coleby School, Karen Espin said: "The school staff, governors and some of the parents badly wanted to see the sampler back in school but school funds could not run to that expense, so we put up a bid ourselves and made it happen.

"We are quite delighted that the sampler will be returning to the school after an absence of nearly 140 years. It really helps the children to understand history when they can see something old that has still survived.

"The sampler will now be hung on the wall in the school's entrance hall with the information from the local newspaper to explain the story behind it."

Katherine McKinnon (48) from Southport, Merseyside, is one of Jane Newman's relatives. She said: "My great-grandmother, Annie Newman, was Jane Newman's younger sister. Annie and Jane's father (my great-great-grandfather) was an agricultural labourer who knew the importance of education for his eight daughters and saved up every week to pay a subscription to send them to Coleby School.

"My grandmother used to tell me about how her family lived in Coleby. I have visited the two cottages they lived in on Blind Lane and have been to the graveyard to see where my family are buried.

"The sampler would have been passed down the female line of the family and when my aunt, who is in her 70s, decided to sell her house in Bracebridge Heath and emigrate to Australia, she must have left it in the attic.

"I did place a bid for the sampler but it wasn't successful. I'm really pleased the sampler has gone back to the village school where it was made."

The term 'sampler' comes from the Latin word 'exemplum' meaning 'an example to be followed'. The first known dated English sampler was made by Jane Bostocke in 1598 to mark the birth of her daughter or niece Alice Lee. It is held in the sampler collection at the Victoria and Albert Museum.

The earliest samplers were sewn by women, rather than young girls, and were intended as examples of different designs and stitches. By the mid-18th century it became common for young girls to work samplers as part of their education of which needlework was an important factor. These samplers usually featured decorative boarders, alphabets, motifs such as animals, flowers and horses and some verses.

During Victorian times, samplers became more pictorial and decorative and were often hung on parlour walls.

Items are now being accepted for the next auction which will be held on Saturday, January 9. A full catalogue will be available online a week before the sale. For more information log-on to www.thosmawer.com or phone (01522) 524984.