Circa 2000 a Mr Marsden (a retired Tanker Captain and an RNLI supporter) from the Isle of Man built a 1:32 scale (172.72 cm long) radio controlled model of a Deep Sea trawler named St. Nectan. In 2002 this model took 1st prize at a model boat festival. In 2005 Mr Marsden donated this model to the RNLI at Ramsey I O M for them to sell and raise money. 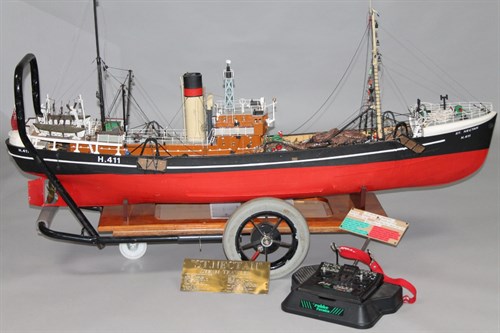 The boat was purchased by Mr Cocking who resided in London. He made it known that on his death he wanted the boat to be given back to the RNLI to raise money by its sale. Sadly, Mr Cocking died earlier this year and his executors, who are based in Nottinghamshire presented the boat to the West Bridgford Branch of the RNLI.

The model boat was then taken to our Grantham saleroom as we've assisted the RNLI in the past. It was consigned into our September auction with Colin Young on the rostrum. Also in attendance that day was David Dickinson and a TV crew filming an episode of “Dickinson’s Real Deal” So at some time in the future you might catch a glimpse of the boat on TV. The boat was sold for £400, which was a good result.

A spokesperson for the West Bridgford branch of the RNLI said: "The RNLI would like to thank the family for donating the model and Golding Young & Mawer for their assistance."