Princess Margaret Bookcases up for auction

Historical items, including a pair of bookcases owned by Princess Margaret, will come under the hammer at a country house sale to be held at Holywell Hall, Holywell, near Stamford, on Wednesday, September 25, at 10am. 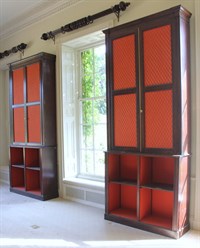 Perhaps, the most exciting lot (121) in this sale is a pair of Regency oak bookcases, once owned by Princess Margaret. The bookcases were commissioned by Augustus Frederick, Duke of Sussex (1773-1843) for his library in Kensington Palace, where they remained until they were dismantled by Princess Louise, Duchess of Argyll around 1940.

Richard Plant, consultant auctioneer and valuer for Golding Young & Mawer, said: "These bookcases are of outstanding provenance. They were made in the early 19th century and were originally fitted but converted to free standing at some point. They have moulded cornices, above a pair of brass-grille doors, and are painted with inventory numbers and with property labels for HRH Princess Margaret."