Of Mice and (Gnome) Men 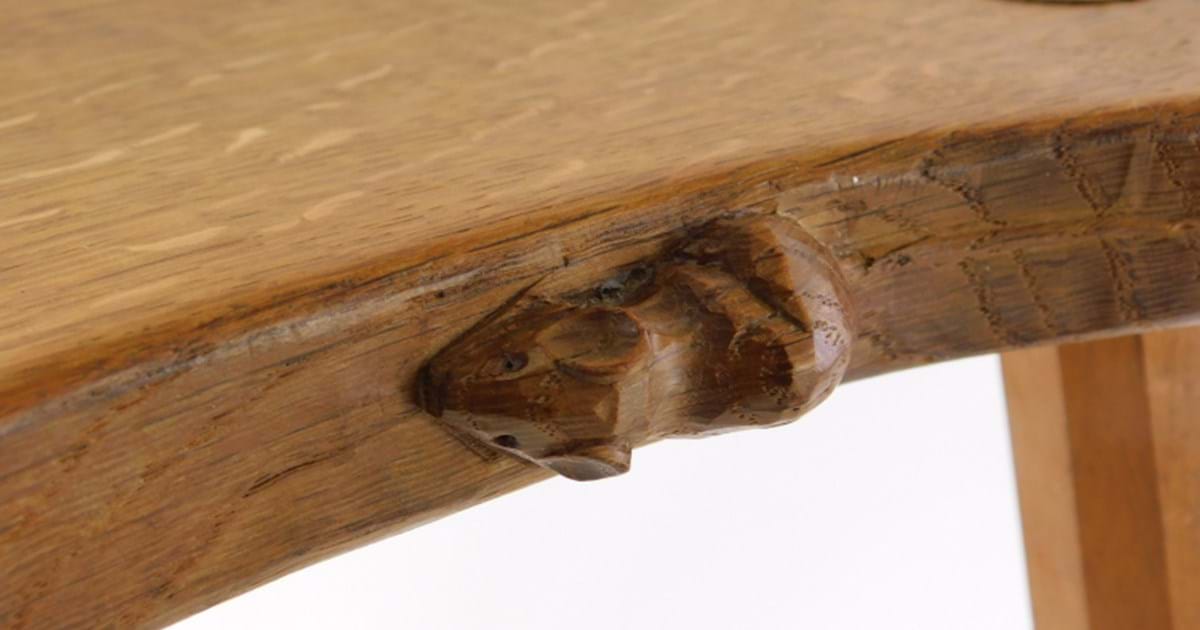 The continued allure of finely carved oak furniture bearing a carved mouse from the hands of Robert Thompson of Kilburn (1876-1955) shows little sign of abating. The simplistic but widely recognised marketing emblem; the humble rodent coupled with the complexity and skill of the craftsmen and the quality of the raw materials used sets Mouseman furniture aside from many others.

It ticks boxes: it is named, collectors and private buyers like named items and nothing is more familiar than the mouse signature. Wares are often stylish and although traditional juxtapose and fit beautifully in a great many environments, meaning pieces gain in value and are often out of reach of many collectors: those from the hands of the great Thompson himself sell for a premium price, but even more modern pieces and those commissioned from new hold their value and cost a huge amount to purchase.

Obviously Thompson didn’t make everything himself and similarly to Warhol or Hirst had a ‘factory’ of apprentices and master craftsmen alike who produced pieces to the standards expected of the great man himself.

This is good news for collectors as it has led to all number of former workers starting up themselves and producing similar wares in oak, sometimes using the same technical skill such as adzed carving as made famous earlier in the century.

These designers are becoming highly collected now and it is a definite area to concentrate on as prices are steadily rising but remain lower generally than the Mouseman equivalents.

A collecting trend to be encouraged is to buy pieces by as many of these Thompson disciples as possible and there are many to go at. There is Colin Almack The Beaverman (no guesses for what he signs his work with) and similarly no-one wins a goldfish for attempting to guess how Wilf “Squirrelman” Hutchinson, Alan “Acornman” Grainger Albert “Eagleman” Jeffrey or Derek “Fishman” Slater identify their works.

What is undeniable is the quality and homage to the great Thompson in what they produce. The illustrated stool by Peter “Rabbitman” Heap of Wetwang is to be offered in our Lincoln Rooms on January 26th and shows the similarity in design from a former craftsman of the Thomson works who has recreated a stylish and iconic item in its own right that would grace a London flat as much as it would a country house.

Prices are creeping up, but the low £100 - £150 required to own this item is a sound investment for a usable and aesthetically beautiful item from a great craftsman at the top of their trade.

A great recommendation for collector now would be to buy these up and coming items and the task is see how many different pieces you can find, you will not be disappointed.