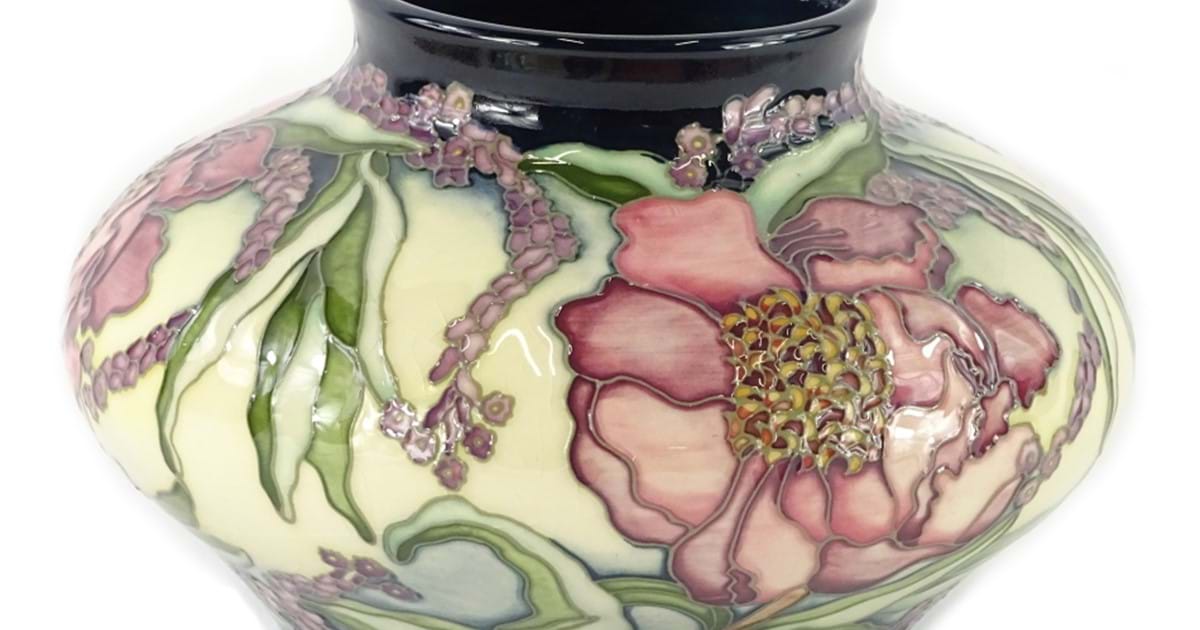 It is important to buy what you like and to encourage bold design into houses, perhaps not with as many pieces as say twenty years ago, but with talking point pieces, by good named factories which may look favourable and hold their value if you come to sell them.

The name which continually appeals, one which has never really crashed and maintains a level in saleroom best price lists is that of Moorcroft.

There are several various collecting fields from these great potters. The very early Macintyre items remain the most sought after. Miniature pieces especially command supreme prices and famed patterns such as Midnight Blue light up salerooms when they appear.

Then there is the second phase Walter and William Moorcroft pieces whether it be the bold Pomegranate pieces or the like which attract buyers to part with large sums.

A more affordable way to purchase is to go for the more commercial and plentiful later pieces which were made in the same manner as the earlier pieces with slip trailed designs but are much more plentiful in number but are still designed and made by a small range of master potters such as Rachel Bishop or Sian Leeper. These master craftspeople were designing in the 1980s and 1990s and beyond producing a range of vibrant wares which would look amazing in the traditional and modern home alike.

They represent much more affordable ways to be that say the top table prices from high Art Nouveau designed pieces, but create just as good a show when displayed individually or in number.

It is always important to buy things that you like, as there is no point in showing them if you don’t and if you like something the chances are someone else will.

It is not all about maintaining a level of financial value in something either, if it looks nice it is irrelevant what it costs, however there are far worse punts in this tricky world of antiques and collectables than buying Moorcroft pottery from the last twenty years.