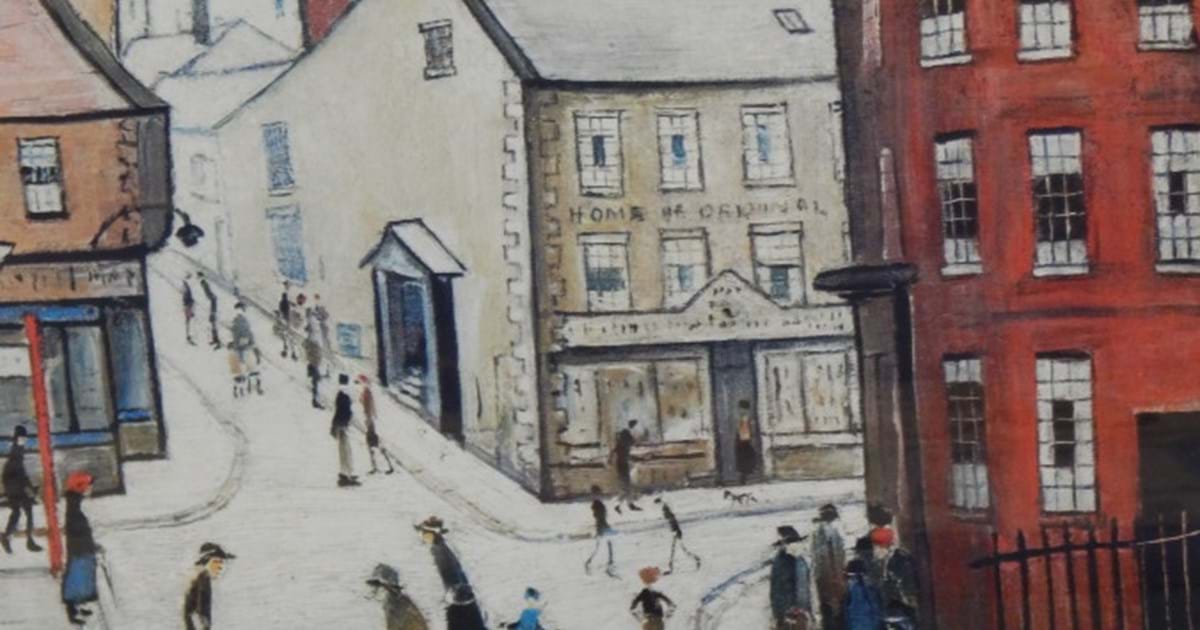 The works of the most recognisable artist of them all, Laurence Stephen Lowry (1887 – 1976) continue to fascinate art collectors, galleries and the wider public alike.

Based in a small paradox of Northern living, Lowry spent most time in Pendlebury and neighbouring Salford, producing a similar arrangement of street scenes famed for his portrayal of the grime and toil of working class life, often painting when time allowed at twilight hours, even using colours and raw materials that would deteriorate over time and emphasise the squalor of what he saw around him.

There many remarkable things about Lowry; not least he rejected several major honours including a Knighthood in 1968. He juxtaposed living  in upper class Mottram and later Cheshire with his overall dislike of the people and surrounding area there and he is as well known for harrowing, oppressive self portraits as he was for street scenes, falling into depression after his father’s death which had left his family debt ridden in 1932 and having to look after his ill mother until her death in 1939.

This took a toll on his painting and after a promising early career when, in 1905 he was enlisted into the Manchester School of Art finding himself under the renowned tutorage of the Impressionist Pierre Adolphe Valette, he only changed his style to what we know today after frequent persuasion from D B Taylor of the Manchester Guardian.

Many of the portraits in the 1930s illustrated his inner turmoil and suffering, a sort of inner working class self mirroring the working class scenes in say Going to The Match.

His landscapes portrayed melancholic, everyday figures, although mere strokes on a page, his characters are all different often  illustrating  normal people doing normal things like going to work or attending a football match. Seascapes and beach scenes were drawn from time spent in the North East at Sunderland and Berwick Upon Tweed, but all works show hopelessness and a degree of pity which appeals to buyers and admirers today.

His legacy marks him as one of the most famous artists in the world. The 2013 Tate Britain exhibition and a major solo offering in Nanjing China are just two examples which highlight his global appeal.

He influenced many other artists such as the great Sheila Fell and continues to be recognized and known throughout the world.

The prints, signed and watermarked and so popular in salerooms today add emphasis to the fact how well loved and admired his works are by high end and middle ground collectors alike. With the aforementioned Going To The Match print selling for upwards of £20,000 and his regular limited edition works changing hands for well into four figures, not to mention the popularity of his original works, the difficulty in attributing originals and the large number of fake works on the market, the worldwide appeal of this northern genius only continues to flourish.