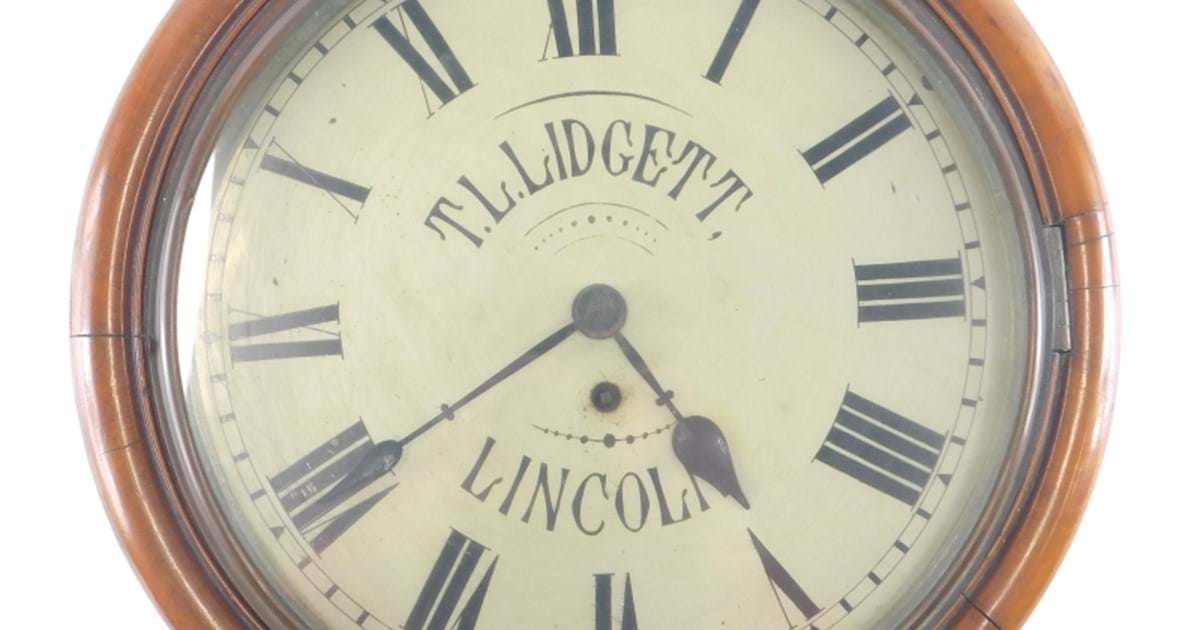 The three main criteria when selling a house can be mirrored in the disposal of fine art and antiques. Even with the global purchasing beast fattened up by online platforms, the ease for someone in Bangalore to purchase from Lincoln as someone in Boston and the criteria that all sales MUST be online unless disaster will ensue are all valid, but there are still instances where selling an item where it was made will yield a higher price than if it were sold elsewhere.

Nothing prove this more than the wall clock offered in the Lincoln rooms only two months ago.

Yes it was better than normal; a fusee movement coupled with a working clock in a good case in original condition is sought after, perhaps to the £300 mark. The reason £1200 had to change hands at the fall of the gavel was the name T L Lidgett Lincoln emblazoned across the front of the piece making it extra special for buyers in this region more than any other.

The name is one associated with this great city. Thomas Laminy Lidgett was a man made good, who sailed and travelled, sold clocks and watches in Grimsby, Sleaford and just off the Stonebow in Lincoln, he was an auctioneer and retailer, who ultimately suffered through mental hardship, regained his mind through the church and ultimately became a local and well known hero, with a book being produced on his life.

It is this, associated with the quality of the piece that makes it extremely important.

Not only does it look good and would appeal to interior decorators and people who acquire attractive objects, it is also one of those rarer pieces that is enhanced by the local name stamped on it.

It brought new buyers into the saleroom, it created a bidding frenzy, with telephone bids a plenty and the internet lit up like a Christmas tree in the four or so minutes it took to sell.

The days are gone where local people only attended local sales and bought there and there alone. The great irony that ‘such things twenty years ago things sold better’ was at a time before serious internet sales  were commonplace. Although the internet hasn’t does the industry any harm, this clock proves how the romance of the local purchase, although not as apparent as it used to be, creates interest for that special one off, local item which creates a result that would not be possible unless it were sold here.

We would be delighted to see any local items at our saleroom and we reckon the chances of another Lidgett clock coming in are scarce, let us know if you have one!