Judging A Book By Its Cover

With its battered extremity, scratched and tarnished giltwork, split spine and general dishevelment, I walked past a cumbersome Victorian album once or twice during cataloguing for the Collective Sale at The Grantham Auction Rooms on Wednesday 3rd May without too much anticipation.

Another Bible or vacant photograph book or an album of decoupage scraps? With dog eared corners, looking as tired as the Grantham staff after putting together this exquisite 700 lot sale in little under two weeks …. let’s put it at lot 300 and hope it makes £20 ….

It’s the red Moroccan leather banding that gives it away though; that particular colour in a description does something to valuers, it creates excitement – the finest pieces often come in this most exquisite wrapping. 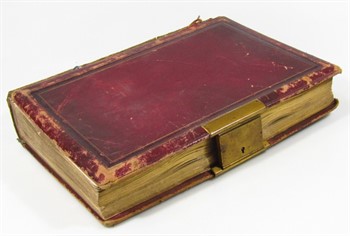 Suddenly my pulse rose (as only can occur in the presence of fine art and antiques) the gilt edged pages seem better than normal, the clasp has a lock – the contents must be of some interest or why have this feature – lets have a look inside ……

What I found was the most astonishing collection of early black and white photographs; a truly remarkable find. Of course objects like this per se are not necessarily interesting and those famous boxes have to be ticked; quirkiness, rarity, desirability, quality and condition. 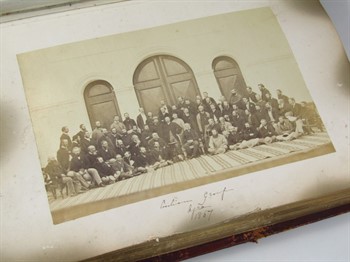 Some of the images show people; interesting photographs usually have people in them, the number of times the photographer has obviously ushered figures out of shot to take the perfect photo of nothingness is certainly not found in the opening picture. The photographs are also early and what makes them really fascinating is that they are from tours around the world. The title page is modest and handwritten to a C Barron. 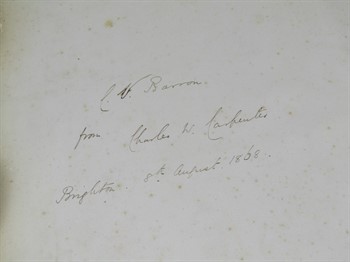 It is dated 1868. The first shows a group shot of dignitaries – not all that unusual but thumbing through we find Annandale Shimla; it is in itself an early image of the site, but with figures in it, everyday people, a snippet of history captured and unique in a large photograph (as the majority are) of approx. 22cm x 29cm. The early scenery in the first part of the album labeled Thibet (sic) must be some of the earliest photographs of these parts. 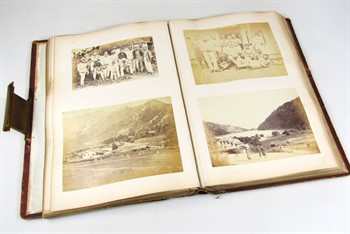 Further on we have late 19th Century images of a fire damaged building, The Lake District, some photos with figures, group shots, musicians, scholars, snow scenes marked Bowne (probably the American printers), images of world scenery and so on. 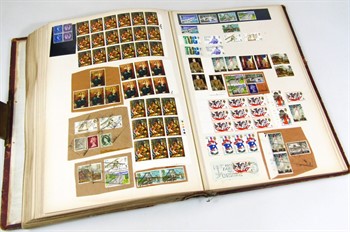 The album is undoubtedly rare and desirable. The frustration is the lack of why the images were done; what is certain is they are early, rare and of great interest.