The name of Usher has been synonymous with Lincoln for over a century and a half; the most famous being James Ward Usher (1845-1921) the great collector and benefactor of the city.

His fortune was made by gaining the sole rights to use the Lincoln Imp in his work. He subsequently bequeathed his collection to the city on the proviso it was used to form the basis of a new art gallery and museum. The Usher Art Gallery was opened in 1927 and still today is one of Lincoln’s principle attractions and research centres.

James Ward Usher was the son of a local jeweller and watch maker in Lincoln and it was his father James who made Lot 2, a mid 19thC Longcase Clock in Golding Young and Mawer’s auction on the 15th of May at The Lincoln Auction Rooms. This particular example is likely to date from 1850 and has a painted dial and an eight day movement. The guide price is £800-1200. 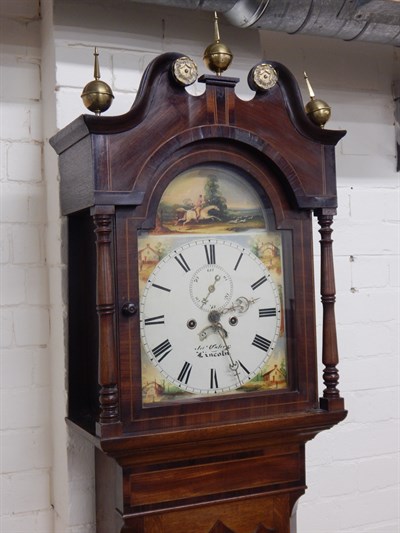 Also included in a packed sale are healthy sections on silver and jewellery, including a collection of gold coins from around the world. The usual assortment of ceramics, glass, pictures and books and perhaps our largest section of furniture for some months ranging from 18th Century French and English furniture to modern pieces.

Also included will be a group of gym weights and equipment as well as a full size slate bedded pool table, an air hockey table and expensive bathroom fittings.

The sale is at The Lincoln Auction Rooms on Wednesday 15th July at 10am. Viewing is on Tuesday 14th July from 10am to 4pm and from 8.30am on saleday.