Daylight Robbery! But the good-guys drove the Jaguar S-type R... 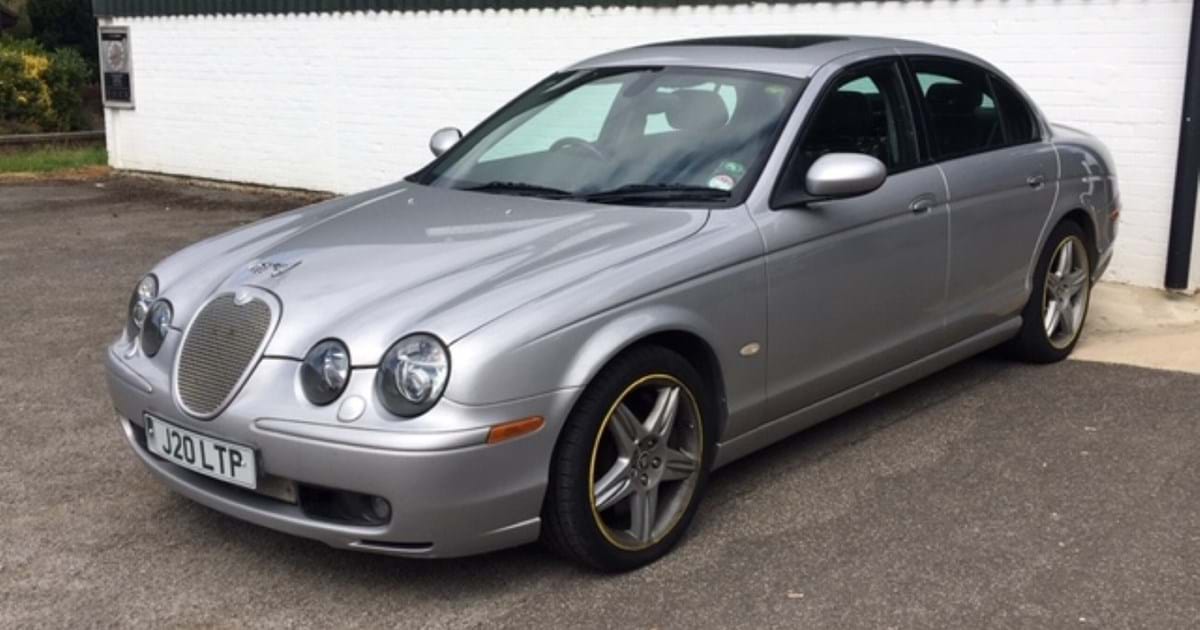 Lot 3001A being offered in the Bourne Toy Transport & Automobilia Sale on the 12th March has quite a history...

Jaguar S-type R, J20LTP started life as H20FSW being owned by Frederick (Freddie) Sidney Williams, otherwise known as ‘Fearless Freddie’. Freddie was born in 1942 in Scottish pit village of Cumnock Ayrshire and was bedridden as a child, having suffered from Polio.  Medical reasons prevented him from following his father, grandfather and great grandfather down the local coal pit as a miner.  With his schooling interrupted he started work at the age of 15, sweeping floors  in the local lemonade soft drinks factory. An unlikely start in life to owning a brand new 2002, S-type R at a cost of £55K and becoming a multi-millionaire.

Freddie’s talent was in maths and calculating odds and became a bookie’s runner, offering small odds to football gamblers, leading him to open his first book at Auchinleck greyhound track and subsequently having pitches at various race courses including buying the first ever pitch for sale at Cheltenham and owning a chain of betting shops across Ayrshire, Scotland.

Channel 4’s John McCririck nicknamed him ‘Fearless Freddie’ as he became known to take on bets that household name betting companies would not touch and the name stuck!  Freddie once won £420,000 in a single day, but instincts sometimes let him down. On 16th March 2006 he famously lost over £1,000,000 to JP McManus at the Cheltenham Festival whilst filming a documentary for ITV.  On the same day he and his daughter Julie were the sadly the victims of an armed robbery whilst driving away in the S-type R from the racecourse to their hotel in Cheltenham resulting in them being beaten up with the robbers fleeing with approximately £70,000 stolen from Freddie’s car.  A chance in a million, to lose over a million!

However, Freddie went on to take several high profile bets from McManus, several of which were in the public domain.  The upbeat Freddie became so successful that he lead a management buyout of a soft drinks factory when it went bust, later selling his shares, which made him a millionaire, investing his money in a bottled water company known as Caledonian Bottlers plc.  A copy of the registration document for the S-type R shows the Caledonian company address with the car first being registered on 18th October 2002.

The Jaguar travelled the length and breadth of the UK taking wealthy businessman Freddie to all the racecourses throughout Britain.  It was during Freddie’s ownership that the vast majority of the car's mileage were clocked up.  Freddie had the car serviced and maintained with Parks in Ayr and Taggarts in Motherwell and Glasgow. No expenses were spare by Freddie on maintaining the car with everything that was needed undertaken. The car changed it’s registration mark to SE52 EXB on 6th August 2007.  Freddie died of a heart attack in June 2008 with his estate estimated to be worth £8 million, he had driven over 150,000 miles in the car.

Following Freddie’s death the car’s ownership transferred on 2 April 2009 to Kevin McNally of Lanark. The car servicing continued to be undertaken by Taggarts in Motherwell.  Mr McNally is quoted as saying the car was ‘amazing and puts a smile on my face every time I drive it!’ However, just keeping the car for just over a year due to the arrive of a new company car.

Mr McNally sold the car privately for £4,000 on 14th June 2010 to Tony Pole of South Kyme and as such the S-type R travelled south of the border from Lanarkshire to its new home in Lincolnshire. The mileage was recorded as 168,449. Other than the number plate changing for the third time to J20LTP little is known of the car under Mr Pole’s two year ownership other than it being sold by Hall Hills Garage, Boston to Roger Coupland of Spilsby for £5,250 on 17th May 2012, with a mileage of 172,199.

Roger himself was a successful and highly respected businessman, well known in Spilsby area. Roger wished to add a luxury high quality car to his collection of classic vehicles. Roger was enthusiastic about motors, had a love for speed and kept his vehicles in excellent condition. All considered the new addition need to be powerful and a joy to drive, pure comfort in his retirement years.

Roger in December 2012 joined the Jaguar Enthusiasts Club and in June 2014 took the car to the Jaguar Enthusiasts Club 30th Anniversary Rally at Thoresby Park, Nottinghamshire, a short hop over the Lincolnshire boundary. Roger’s health had declined during 2014, however feeling better he invited Paul Skilleter of the Jaguar Enthusiast Club to visit him at home in March 2015 with the car being featured in the Jaguar Enthusiast Magazine. At the time of the article the car was reported as a ‘well preserved S-type R’. At the same time Roger decided after enjoying Thoresby Park that the car should be brought up to show class standards and arranged for the work to be undertaken.  Roger then pre-booked to take the show class car to its first rally of 2015 in Suffolk on 17th May, three years to the day after purchasing it.

Unfortunately Roger’s health took a turn for the worst and he was admitted to hospital.  So determined and desperate to see the S-type R in restore condition he cleverly talked family members into taking him to the rally after wisely arranging for a nurse to accompany him. Very sadly Roger never made it to the car rally with his beloved S-type R as he passed away later that month.  The car had a mileage of 173,555. Roger did not seek to change the registration mark J20LTP but added the handsome Jaguar mascot leaper to the hood.

It is now time for the S-type R to find another dedicated owner to enjoy and care for this modern classic with its sheer beauty of class and power this car possesses. The car with a mileage of 173,600 has been driven less than 1,500 miles in the last six years making this 15 year old car an absolute future classic with its unusual history and now with an average mileage for its year!

Our thanks go to the Executrix for such a detailed documentation.