Grantham Collective Sale Brings In The Buyers Once Again!

The last collective sale of the year at the Lincoln Auction Rooms on December 18 will feature an impressive collection of Boxing memorabilia.

The 38 lot collection spans a golden age in boxing from the 1930s to the 1980s and consists of mainly magazines and programmes.

A highlight on the day is sure to be those featuring heavyweight boxing legend Mohammed Ali. With 56 wins out of 61 fights he well deserved his nickname 'The Greatest'. The collection includes programmes from Ali's World Championship fights versus Henry Cooper, Joe Frasier, George Forman, Larry Holmes and Leon Spinks. 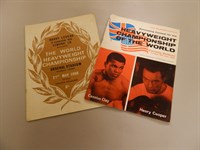 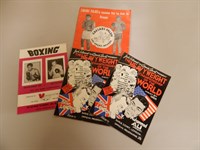 There are also programs featuring British interest, Randolph Turpin. Turpin was considered to be one of the best middleweight boxers of the 1940s and 50s. He went on to fight the world championship against greats such as Sugar Ray Robinson

Lincoln saleroom manager, John Leatt said: "This is an impressive collection of boxing memorabilia, which was discovered by relatives when clearing the contents of a North Lincolnshire attic."

The full sale catalogue can be viewed online. Viewing will be open at the Lincoln Auction Rooms on December 17 between 10-4pm and before the sale on December 18.