Over 3,500 lots will be sold in a massive four-day auction event to celebrate the merger of two of Lincolnshire's oldest established salerooms.

Tipped as the 'largest auction Lincolnshire has ever seen', the sale will take place at Golding Young of Grantham on Wednesday and Thursday, November 3 and 4 and continue at Thomas Mawer and Son of Lincoln on Friday and Saturday, November 5 and 6. 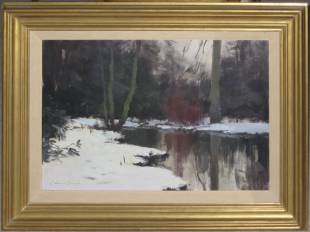 The highlight of the Grantham sale will be a collection of five paintings by the artist Edward Brian Seago (1910-1974) which are being sold by the family of Sir Guy and Lady Lawrence. Sir Guy Lawrence was the deputy chairman of J. Lyons and Co who made several well-known brand acquisitions for the company, including Tetley Tea and Findus.

Auctioneer Colin Young of Golding Young of Grantham said: "We are delighted to receive instructions from the family of Sir Guy and Lady Lawrence to offer five important works by Seago. All of the paintings were acquired in the 1960s and early '70s and this is a rare opportunity for collectors and investors alike to acquire works previously unseen at auction." 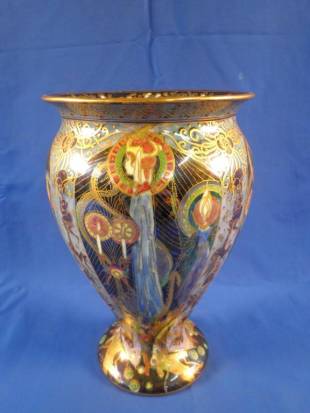 Another oil on board titled 'The Green Pool' was purchased from P&D Colnagni Ltd in December 1962 for £184.10 and is now expected to fetch between £15,000 and £25,000. The third oil on board, titled 'A Suffolk Farm', was bought from the same gallery and carries the same estimate.

A painting by the artist John Piper (1903-1992) titled 'Elizabethan Dance' is expected to fetch between £5,000 and £7,000. The signed and framed gouache and watercolour was the original artwork for one of a series of Lyons Restaurants lithographs. The painting was lot number 17 in a catalogue of original works produced by J. Lyons Ltd, Cadby Hall, London, in December 1974. Priced at £510, it was purchased by the current vendor's family for £550.80 and it is now being sold with the original sales invoice.

A painter of architecture, landscape and abstract compositions, Piper exhibited 52 works at Lincoln Cathedral and designed a tapestry at Long Sutton. Several of his works are held in the Tate Collection.

The furniture section includes items from Fulbeck Hall, near Grantham. When the hall was sold six years ago, Golding Young dealt with the sale of the contents of the cellars and attics, and some items were retained by the family and put into storage. These items are now being sold and among the lots, buyers will have the chance to bid on a set of six William IV rosewood dining chairs, circa 1835, which are estimated to fetch between £800 and £1,200.

One of the highlights of the sale at Lincoln auctioneers Thomas Mawer and Son is a Wedgwood Fairyland lustre vase with a Candlemass pattern which was brought into the free Friday valuation clinic.

Auctioneer John Leatt said: "The owner brought the vase into the valuation clinic in a washing up bowl with lots of small ornaments wrapped in newspaper inside it. She had no idea of its value and was very surprised when I explained it was a very desirable collectors' item which we estimate will make £2,000 to £3,000 on sale day."

The clocks section includes over 30 timepieces including a George III eight-day longcase clock by G. Jackson of Gainsborough circa 1780 which was consigned by a Lincoln-area family and is expected to fetch between £800 and £1,200.

According to a local clock expert, its maker George Jackson was said to be a 'very eccentric character' who attended Blyton feast every year for 60 years, always sat in the same seat and ordered roast rabbit. He added: 'He never drank tea, substituting only English wild plants principally Egremont, and in seeking this near Risby, he died overcome with heat aged 83 in 1831.'

Among the pictures and prints in the sale is a painting of notorious East End gangsters Ronnie and Reggie Kray by the 'Teacup Poisoner' Graham Young, another Picasso-style painting by Young and seven paintings by the Kray twins which are all expected to fetch between £200 and £600 each.

Among the pottery, porcelain and glass are over 100 items of predominantly Royal Worcester and good quality Bohemian glass. Mr Leatt said: "There are a group of, mainly Arab and Middle Eastern, buyers from London and the Continent who are buying Bohemian overlay glass for the incredibly strong market in Paris and London."

A Bellarmine jug, dating from around 1650, consigned from a North Lincolnshire private collection is expected to fetch between £800 and £1,200. Bellarmine jugs were produced during a period of 200 years between the 16th and 18th centuries. The jugs take their name from the Roman Catholic cardinal and theologian Roberto Bellarmino who was canonised in 1627. The decoration on the jugs of a bearded man, a depiction of Bellarmino, is thought to make a mockery of the Catholic prohibition of drinking.

Mr Leatt added: "We had a Bellarmine in the October sale which failed to sell. But after it was featured on the BBC's Restoration Roadshow, which was aired recently, we managed to secure a sale on that item well in excess of its original estimate."

The ceramics and glass section of the sale also features a pair of rare Wedgwood and Bentley Black Basalt Sphinx which are expected to attract the interest of collectors and fetch between £1,500 and £2,000. Mr Leatt said: "We are unaware of any 18th century examples coming on to the market in recent years and to have a pair is incredibly rare. The market is very strong for Wedgwood in America so we are expecting lots of interest in this lot."

There is also a large collection of Reeves and Stuart scratch-built model engines and Gauge One model railway.

A full catalogue will be available on-line a week before the sale. For more information phone Golding Young at Grantham on (01476) 565118 or visit www.goldingyoung.com or phone Thomas Mawer and Son on (01522) 524984 or visit www.thosmawer.com.