Fierce bidding between buyers on the Internet and those in the room ensured over £250,000 was fetched during a special two-day sale at the Lincoln auction rooms.

The residual contents of Orston Hall in Nottinghamshire, a 'grand country house' which belonged to Mr Barry Gibson and his family for over 50 years, were featured in the sale, along with items from other estates and local vendors, at auctioneers Thomas Mawer and Son of Portland Street yesterday and today (Tuesday and Wednesday, October 13 and 14).

Auctioneer John Leatt said: "For over 50 years Mr Gibson lived at Orston Hall and filled his home with furniture, ceramics and works of art worthy of an English country house.

"We were delighted to have been asked to sell the contents of the hall and as predicted, the sale has attracted a lot of collectors and antiques enthusiasts."

In the first day of the sale, a pair of Martinware vases sold for £1,800, well above the £1,000 to £1,500 estimate. A commission bid on the book opened the bidding at £500, then a buyer on the Internet and another in the room rapidly took the price higher until finally the hammer fell at £1,800.

A series of Meissen figures fetched high prices and were bought by a collector from Oxfordshire. A pair of ladies seated at tables, one with a bird cage and the other with a posy, were estimated to fetch between £300 and £500 and made £950. A collection of 30 mainly Meissen miniature animals and birds made its top estimate of £800 and a late 19th century porcelain group of children playing around a tree made £900, over the £400 to £600 estimate.

A rare 18th century Leeds creamware tankard, decorated with a sportsman in a landscape with a gun and dog, fetched £950, over its £400 to £650 estimate.

Several Victorian copper jelly moulds made £685 in the sale. Of these the highest price was achieved for a mould in the form of a stylised castle and another shaped as flames which fetched £280, well above the £150 to £200 estimate.

In the silver section, a George III two handled loving cup, monogrammed 'JH, London 1789' by Hester Bateman fetched £440 and a set of four Victorian silver chamber sticks and snuffers fetched £1,500, well above the £800 to £1,200 estimate.

A pair of lobe-shaped silver entree dishes, featuring borders decorated with shells and made in Sheffield in 1918, fetched £900.

An 18ct gold cased open faced Gentleman's pocket watch with sweep second hand and 9ct chain, estimated to fetch between £600 and £800, made a hammer price of £1,300 when an Internet bidder competed against a buyer in the room.

In the rugs section, a Tekke Turkman carpet fetched 13 times its highest estimate of between £200 and £300 to fetch a hammer price of £4,200. Bidding started on the book at £300, then a bidder in the room competed with another on the telephone to push the price up. It finally sold to a Continental telephone bidder for £4,200.

Meanwhile, a Turkoman carpet was also hotly contested by two internet bidders to fetch a hammer price of £1,100, well over its estimate of £150 to £200, and a Kizil Ayak carpet, circa 1880, with a design of medallions on a red background, was expected to fetch between £400 and £600 and made a hammer price of £950. 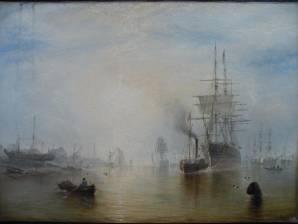 The second day of the sale started with the pictures and prints section. Highlights included an oil on canvas titled 'Tilbury on the Thames' by Claude T. Stanfield Morre (1853-1901) which sold for £3,900, over its £2,000 to £3,000 estimate. Bidding opened at £1,000 in the room and then a bidder on the Internet and another in the room pushed the bidding upwards. The painting was finally won by the bidder in the room.

Dated 1879, the painting depicts a Russian cargo ship probably seized during the Crimean War being towed by a tug into Tilbury. The inscription on the back, which reads 'Tilbury fought with police station formed out of a Russian prize', is believed to mean it is going to be broken up and the timber used to build a police station.

An original watercolour of an 11th Hussar (Prince Albert's Own) by Orlando Norie, dated 1880, from The Parker Gallery in London fetched £260 and was bought by a buyer over the Internet.

An 18th Century School oil on canvas of figures within an Italianate landscape, estimated to fetch £400 to £600, made four times its highest estimate when a bidder on the telephone and another in the room competed for it. It finally sold to the buyer in the room for £2,400.

A signed oil on canvas by W. Evans-Linton of a farmer and three shire horses ploughing fetched £3,600 and was bought by a local buyer.

Among the bronzes in the sale, a sculpture titled 'Crouching Fawn' by Henri Gaudier-Brzeska (1891-1915) sold to a buyer in the room for £5,200. The sculpture had been bought at an antiques fair in America for just $300.

In the boxes section, an 18th century Continental ebony table cabinet, which was probably Flemish, was estimated to fetch between £800 to £1,200 and made a hammer price of £2,100.

Among the clocks, a Liberty and Co pewter timepiece, possibly designed by Archibald Knox, sold to a bidder on the telephone for £1,600 and a late 19th century French gilt brass carriage clock with porcelain panels and dial signed 'W. Schonberger, Wein' made £3,000.

Finally in the furniture section of the sale, a wardrobe and pair of single beds made by Robert 'The Mouseman' Thompson of Kilburn, West Yorkshire, fetched well over their estimates. Bidding on the wardrobe started with a bid of £2,500 left on the book and then a bidder in the room and another on the phone took the price up to £5,100, well over the £1,500 to £2,000 estimate.

The pair of Mouseman single beds were estimated to fetch between £800 and £1,200 and fetched a hammer price of £3,000, selling to a buyer in the room from Yorkshire.

Two George IV mahogany library chairs in buttoned green leather were estimated to fetch between £800 and £1,200 and made a hammer price of £2,500, selling to a buyer on the Internet. A George III figured mahogany clothes press fetched £1,800.

The next sale will be held on Saturday, November 7. A full catalogue will be available on-line a week before the sale. For more information log-on to www.thosmawer.com or phone (01522) 524984. Live bidding will be available via www.the-saleroom.com