Examples of the best traditions of English silversmiths in the 20th century are to be offered as the bedrock of Golding Young’s silver sale at The Bourne Auction Rooms on Wednesday, 12th July. Foremost of the lots on offer are a number of pieces by the renowned designer Omar Ramsden, made either under his auspices alone, or in association with Alwyn Carr.

Omar Ramsden was born in 1873, studied at the Sheffield School of Art and the Royal College of Art, where he met Alwyn Carr. By their mid twenties they had set up studios and workshops in London exploiting the fashion for good quality Arts & Crafts design. His pieces were often inspired by Renaissance and Gothic motifs, and with Celtic inscriptions. His partnership continued with Carr until 1919, and thereafter he operated in his own right. 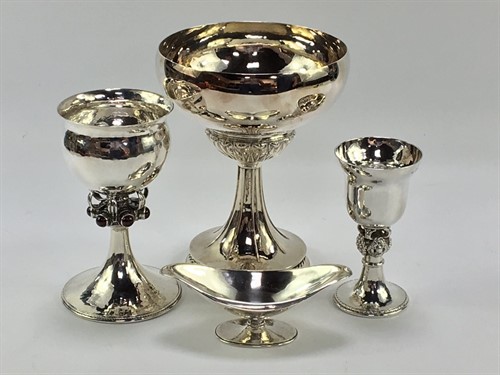 Other silver included for auction include examples of work by Stuart Devlin, Robert Stone and Mildred Creed, together with good Chinese and Japanese silver from the late 19th and early 20th centuries.