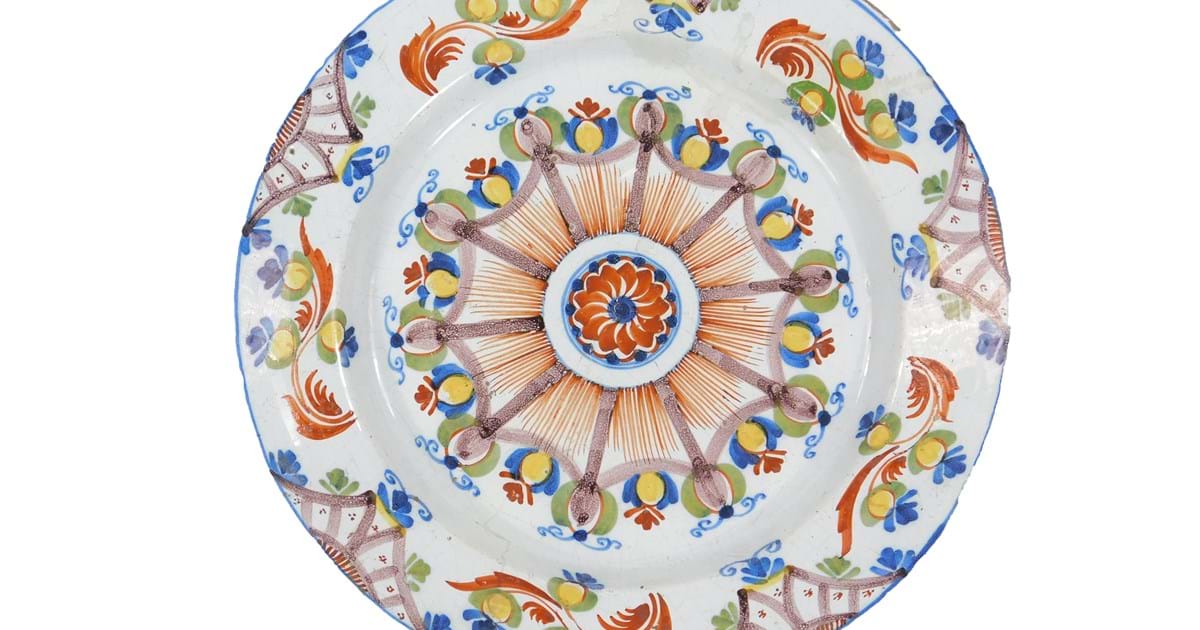 Delftware, commonly recognized as earthenware decorated with a tin glaze, was first produced in Antwerp in the early 16th century where a group of potters tried to create usable vessels on a non commercial scale for everyday use.

The founder of Delft was the Italian Guido Di Savino; as war erupted in Holland Di Savino and other potters were forced north, many settling near to Delft, where this distinctive pottery type gets its name.

The illustrated dish is an English Delft charger from the mid eighteenth century. Items were not made on our shores until around the 1550s, with a Malling jug found in the South East being the earliest known piece of Delftware in the country. Production intensified and by the late 16th century and Jasper Andries and Jacob Jansen were creating large numbers in Norwich by the 1580s.

By the time this dish was made, the producing powerhouses were London, Liverpool, Bristol and some parts of Scotland and Ireland. Clay was often imported to England from areas such as Carrick Fergus and it is no coincidence Delft potters congregated close to ports.

Object types were vast: flower bricks, chargers, barber’s bowls, figures, tiles and various food containers. The nature of the body and glaze meant items were brittle unlike  Chinese items from the same era, therefore it is impossible to find pieces of age without large scale damage or losses to glaze. Named pieces and known makers are rare as production was not on a highly commercial scale.

As time passed pieces became more accomplished with Bristol producing  bianco sopra bianco (white on white) borders on many of their wares as well as famous Biblical events such as Adam and Eve or royal chargers were portrayed with subjects celebrating Queen Anne and Charles II.

The dish illustrated is  c.1760 from the Lambeth or Vauxhall region . Badly damaged and although unusual as it is not in its usual blue colourway, it is relatively affordable in today’s market.

The production of English Delft highlights an important part in the history of potting from 1550 to its demise in the late eighteenth century when Josiah Wedgwood discovered Creamware, through to its reincarnation today by Studio potters.