We had a fantastic start to our Bourne Collective Sale on Wednesday 14th June, with lot 1 making £15,000. This bronze and ivory sculpture by Demétre H Chiparus, of Paris, is a fine example of the dancing figures created during the Art Deco period. Demétre although Romanian lived and worked in Paris throughout his working career. He was one of the most commonly known sculptors of this period. Producing many high end and specialist pieces, includes sculptures of figures and busts. 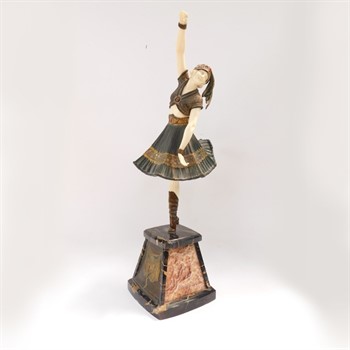 These figures are most commonly seen on a marble base, with ivory and bronze bodies. As well as the higher end figures such as the one sold on the 14th June, a vast number were reproduced for the mass market. These figures are made in the same style but made of resin, with a marble base. Such as the one below. These are of lesser value but are still highly collectable. 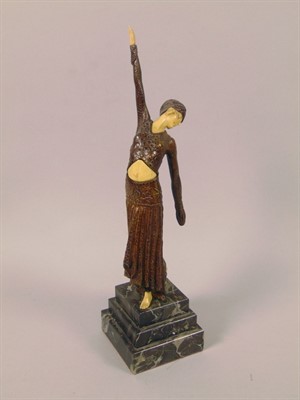 The Art Deco period of the 1920’s-30’s was one of great design and flamboyance. It is believed that the period hit its high point in 1925 in Paris. The period influenced many designers, with some spectacular pieces being produced. High end jewellery during this period was a key area for the style to be shown. As shown with the images below the Art Deco design was focused on straight lines of excellence, and a fresher design than had previously be seen. Its key was to combine what was perceived to be a modernist style with expert craftmanship and rich materials. (From left to right: Sold for £1,300, £1,400 and £1,350) 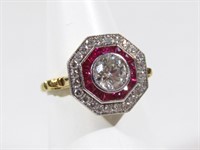 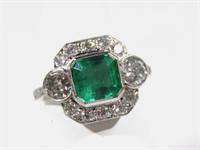 The overall influence of the Art Deco period was seen through all elements of society, not just art and antiques. The period is reflected on architecture, furniture, fashion, cars, and even everyday objects like radios.

Thinking of selling? Or looking for advice?