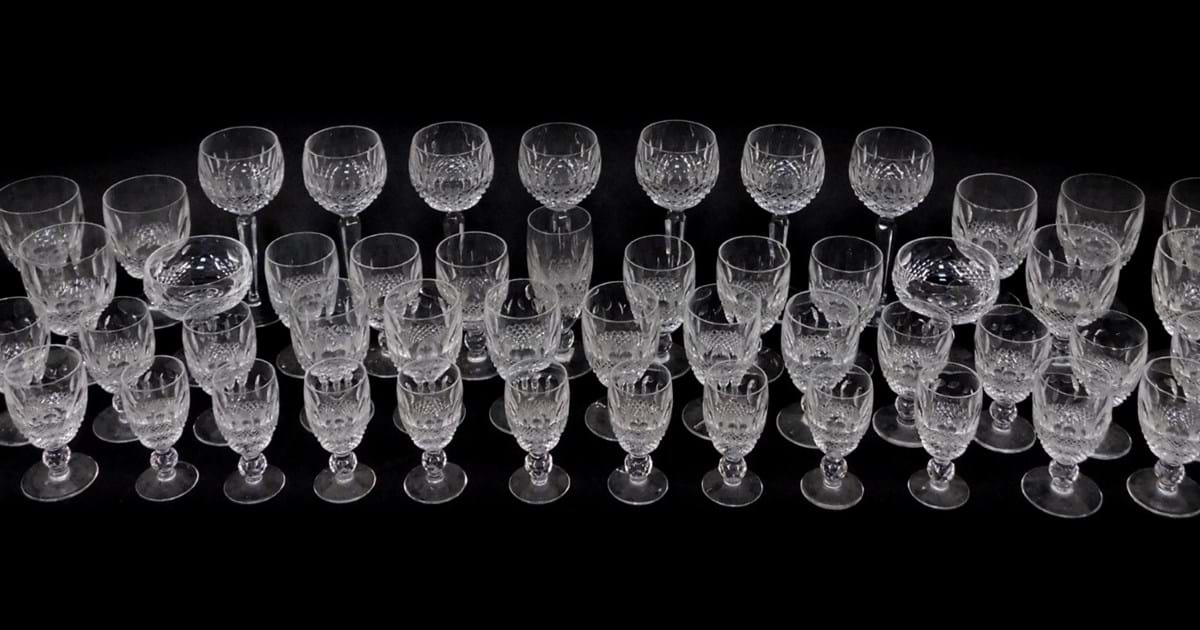 The name Waterford Crystal is synonymous with style and quality and highlights the old collectable adage that a name certainly sells an item.

The glassware market is perhaps not as buoyant as it once was, certainly for modern crystal; ornaments are not displayed as much as they once were and buyers turn their noses up at drinking glasses which ‘won’t go into the dishwasher’. This has hit auction sales of almost every British and Irish manufacturer of fine crystal, except the mighty Waterford, a hallmark for class, quality and the finest craftsmanship.

The history of Irish glass on any commercial level begins in County Tyrone, with the opening of their first glassworks in around 1771. This in turn would not be possible were it not for the prowess of George Ravenscroft who in around 1676 developed early lead crystal.

George and William Penrose were the co founders of the original Waterford Crystal works in 1783 and their master craftsman John Hill through supreme ability to polish and cut glass to the highest level had them firmly on the map by around 1785.

The history of the firm has been a rollercoaster of fame or famine and its fortunes acts a barometer of the financial situation of the times. By 1851 the company ceased and for 100 years the great name became dormant. After the depression years of the 1930s and post World War II the Czech immigrant Charles Bacik rekindled the factory and with the help of Miroslav Havel brought skilled glass makers from Europe in to produce yet again crystal of the highest order.

The factory was taken over by The Irish Glass Bottle Company and went from strength to strength with its undoubted heyday being the 1960s where they provided the many new department stores directly across the world.

Things could not last as economic disaster struck in the 2000s; the fortunes of this great factory were again hit. An insolvency and wind up order occurred in 2009 of the owners Waterford Wedgwood closed and although a site relocated to The Mall in Waterford, much of what has recently been produced was done so in Europe from the Czech Republic, to Hungary and Germany.

The company has encompassed a great tradition and a number of star designers From John Hill himself to Jasper Conran. Any number of buildings from Windsor Castle to the Kennedy Center can boast Waterford commissions and umpteen sporting trophies from the Ashes cricket crystal vase to the former World Hurdle at Cheltenham showcase the work of this great factory in their awards. The second hand market remains very strong at auction proving quality and a good name will always lead the way. This can be summed up by our buyers who want Waterford crystal rather than just crystal.