Take a pew! Offers are being invited for the contents of a redundant Methodist Chapel in Lincolnshire. 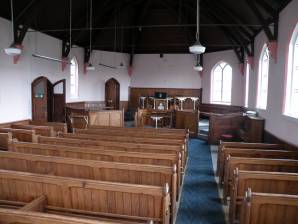 Twenty-two church pews, an altar table, a piano, a communion set and other items at Potterhanworth Methodist Chapel are all available to the highest bidder through Lincoln auctioneers Thomas Mawer and Son of Portland Street. Bids will be accepted at the auction house until the end of May.

Built in 1888, the chapel on Barff Road replaced an earlier chapel elsewhere in the village. But in August 2008 - 120 years after it first opened - the building ceased to be used for worship.

Now the contents of the chapel are being sold and the building itself looks set to go onto the market once planning permission to convert it for residential use has been approved by North Kesteven District Council.

A spokesperson for the Lincoln South Methodist Circuit said: "The building has to be maintained by the people who worship in it and when the numbers of worshippers dwindle, funding becomes too difficult for them. The worshippers themselves took the decision to close the chapel in August 2008."

Lincoln estate agents Pygott and Crone will be dealing with the sale of the building.

Will Downing, partner in Pygott and Crone in Lincoln, said: "An architect is currently drawing up plans which will go to the client for approval and ultimately to the planning department. We are taking enquiries on the property at the moment."