An unusually large Victorian chess set by Jaques of London fetched £850 in the October sale at the Lincoln auction rooms. 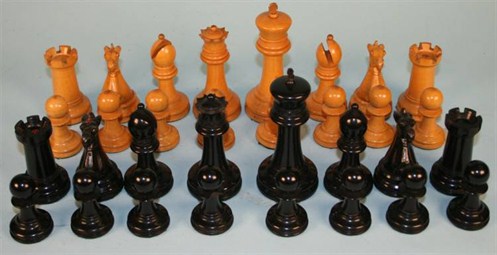 The Staunton pattern set, which comprised of turned sycamore and black stained pieces, sold to an international buyer bidding on the telephone at the sale at Thomas Mawer and Son of Portland Street on Saturday (October 3).

Auctioneer John Leatt said: "The game of chess is an old favourite and antique chess sets are very collectable because there are so many different types to collect.

"Jaques' sets are considered the Rolls-Royce of chess collecting particularly those in complete and original condition. This set was in very good condition and we expected it to attract a lot of interest on sale day."

Founded in 1795, Jacques London is still trading to this day and is now in its sixth generation. It is regarded as the oldest sports and games company in the world and has made games for the Royal Family.

The company's founder Thomas Jaques was a famer's son of French Huguenot descent who left his home in a small village in Wiltshire aged 15 to seek his fortune in London. He became an apprentice to bone and ivory turner Mr Ivy who had premises at 65 Leather Lane, Holborn. Thomas proved to be a talented craftsman and aged 21, he married Mr Ivy's niece.

Nine years later when Mr Ivy died, Thomas, then aged 30, took over the business, establishing 'Thomas Jaques (Manufacturer of Ivory, Hardwoods, Bone and Tunbridge Ware)' in 1795. His son John was born in the same year and 20 years later, he became a partner in the company which was now known as 'T. And J. Jaques, Wholesale Ivory Turners'. They specialised in timber products and made croquet mallets out of the hardwood Lignum Vitae.

In 1847- 8, John Jaques and his brother-in-law, the famous chess player Howard Staunton, collaborated to create the Staunton chess set, a design which is still used to this day. They made the pieces with heavy bases and slender tops so other pieces on the board would not be hidden, and used easily recognisable symbols.

Thomas Jaques' grandson John also joined the business and is said to have invented traditional Victorian parlour games like Happy Families, Tiddlywinks, Ludo and Snakes and Ladders which the company made, along with dominoes and wooden backgammon game boards.

The militaria and country sports section of the sale attracted a lot of attention from collectors. A 19th century Indian ceremonial sword, which was possibly an executioner's sword, fetched £700, well above its £75 to £150 estimate, and a 19th century English sabre and scabbard with German blade made £600.

A Persian Kinjal and scabbard, estimated to fetch between £75 and £120, made £500, an Indian cast metal spear fetched £280 and two Flintlocks, an Arabian percussion pistol and some gun parts made £300.

Nine lots of vintage fishing tackle fetched almost £800. This included a Hardy Perfect 4 inch salmon fly reel, estimated to fetch between £30 and £60, which made £210 and two 3.5 inch salmon fly reels by J. Bernard and Son of 45 Jermyn Street, St James which made £160, well above the £60 to £120 estimate. An assortment of vintage fishing tackle, including salmon and trout flies, casts, packets, reels and fly boxes, also made £160.

In the furniture section, an early Victorian rosewood chiffonier fetched £580.

A special two-day sale of the residual contents of Orston Hall, Nottinghamshire, will be held on Tuesday and Wednesday, October 13 and 14.