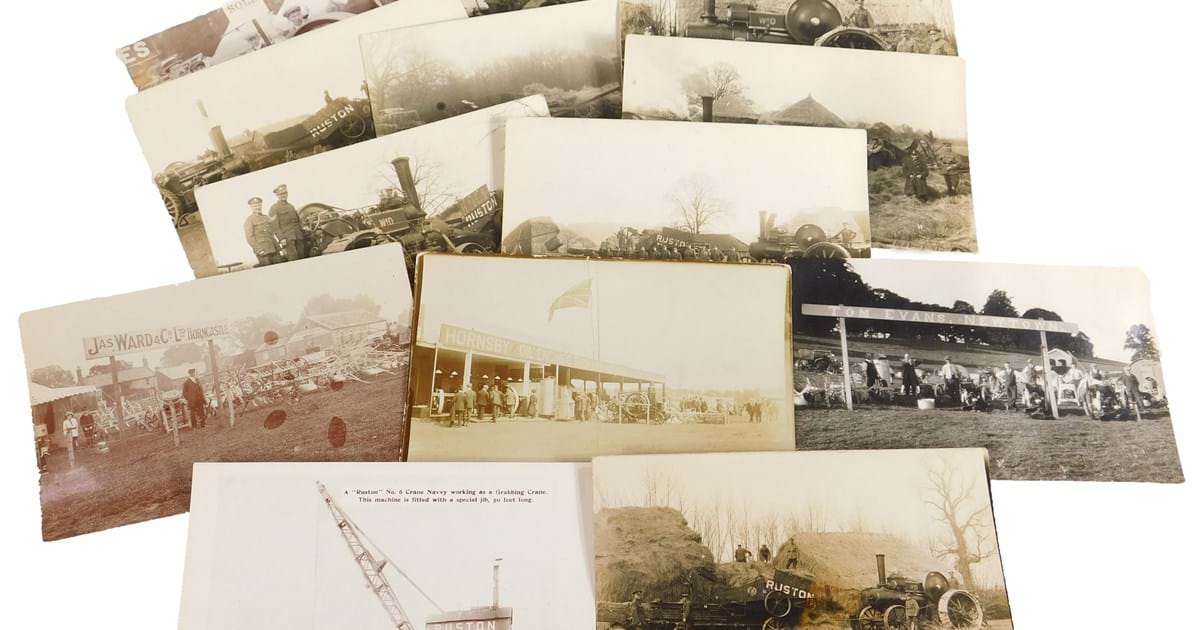 A cache of Ruston, Hornsby and other agricultural postcards, discovered during the clearance of the estate of Bob Curry one of the great Grantham collectors, rank as some of the finest ever seen at the Grantham Auction Rooms.

Found a day after the Council confirmed the demolition of the former Ruston building in Lincoln (it would have made a fantastic swimming baths and ice rink) they help illustrate the range of products produced and the importance of these industrial heavyweights.

As these buildings disappear, so does the legacy of what they represented. The result of The Great War would have been in question without these powerhouses and other local factories such as William Foster.

The cards were produced to advertise the steam engines, tractors and agricultural items to potential clients. They predate the merger between Ruston’s and Richard Hornsby in 1918 and were made in the later era of the original Ruston factory established by Proctor and Burton who joined forces with Joseph Ruston in 1857.

Some show soldiers on various implements, steam engines and threshing machines illustrating their use. A navy crane highlights the range of objects Ruston produced.

Add to these an exceptionally rare postcard, illustrating the Grantham firm of Richard Hornsby. Established in 1828 until the merger in 1918, they became world famous for heavy oil engines and the development of the Hornsby-Akroyd oil engine with Herbert Akroyd Stewart (born 1864). This card shows Hornsby at an oil engine stand at an agricultural show.

Ruston were world leaders in advertising this was enhanced with the Hornsby merger, producing the Palm Tree and other advertising signs and a huge array of guides, booklets, ephemera and posters to establish their name as a global leader, but postcards for both firms pre-merger are rare and desirable.

Scarcer still are the smaller stand cards of Tom Evans Newtown and Jas Ward & Co, Horncastle. They tick many boxes of what constitutes desirability: unusual images, with people in them, showing industrial engines from some of the best known makers and all from the very early 20th century: all in all it is a fabulous collection and one which needs to be cherished to preserve the great names in Lincolnshire’s industrial heritage.