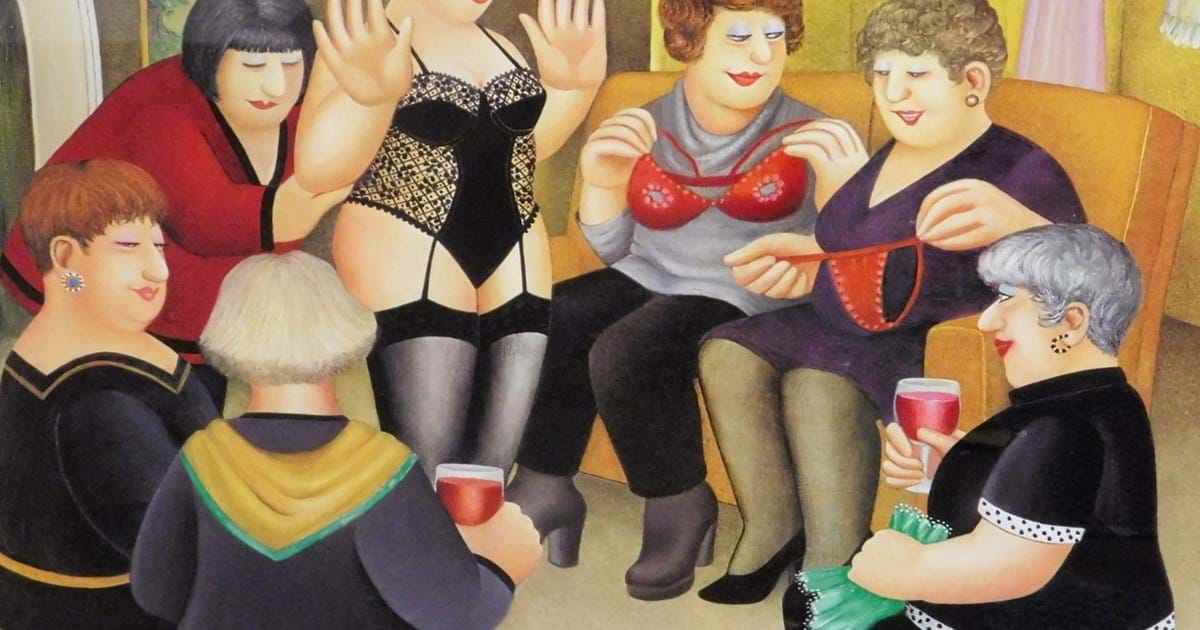 Some of the more recognisable paintings of the late 20th century come from the mesmerizing hands of Beryl Francis Lansley (1926-2008) better known in galleries and auction houses as Beryl Cook.

Her style is so recognisable that one glance of her work will familiarise even the least artistic of us into knowing straight away a work by this very shy but technically gifted artist.

On a personal level my childhood was dovetailed with many a Cook illustration in books of the day. The familiar oversized characters, portrayed often in jovial settings have become imprinted into my mind and works by this Egham marvel have remained in my thoughts well into adulthood.

As an artist, she became a household name after a run of many adventurous occupations: she ran a pub, tried out as a showgirl, when moving to Plymouth in 1968 she ran a guest house and it was this range of jobs which are beautifully illustrated in the oversized ladies and gentlemen she portrays. There is a childish innocence in her style, juxtaposed with a slight edge, from pole dancing clubs to bingo halls, she illustrated the working class not in the usual gritty way but with a jolly outlook more befitting of a children’s book than the hard toil associated with many coastal areas of the time. Her style is influenced by the likes of Stanley Spencer, but her works were created with large doses of individuality and skill.

It was by chance and well into the 1970s that her work became known at all. She was self taught and very shy with her first major exhibition only coming in 1975 in Plymouth. The effects of this were mind-blowing. The Sunday Times came knocking and did a feature shortly after and later on she appeared on programmes such as 'The South Bank Show' and was regularly exhibiting at the Portrait Gallery from 1976. Her achievements were rewarded with an OBE in 1995 and her work is as distinct as any artist. She was widely popular and it was with great shame that she was largely shunned by major parts of the art establishment.

With publicity and fame comes high prices and original works change hands for many thousands of pounds. Pieces such as 'Tea In The Garden', portraying a nude tea party, the self explanatory 'Hen Night' or the illustrated 'Party Girls' being recognisable for their artistic merit and humour. Luckily, works can be shared by all due to the range of signed prints she produced with change hands for low hundreds of pounds.

Her style is timeless and individual and her works continue to flourish: the world is a much happier place with Beryl Cook’s works in it.