Watch Saleroom manager, John Leatt, preview a lovely example of Clarice Cliff porcelain which goes under the hammer during the 150th Anniversary sale at The Lincoln Auction Rooms on Thursday 4th September.

Lot 3096 is a Newport Pottery Clarice Cliff Bizarre Latona Viking long boat, externally painted in red and black against an ivory ground, raised on slab supports, black printed marks. It is in fabulous condition and is expected to make £600-£800 in the sale room. 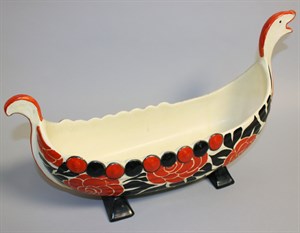 John Leatt said: "We have such an ecletic mix of antiques and paintings, there really is something for everyone at the Lincoln part of the 150th Anniversary sale."