The contents of the home of the artist Barbara, Lady Brassey of Apethorpe will feature in the next sale at the Lincoln auction rooms.

The contents of the home of the artist Barbara, Lady Brassey of Apethorpe wI'll feature in the next sale at the Lincoln auction rooms.

Lady Brassey passed away at her home in Ketton, near Stamford, Lincolnshire, aged 98 in August 2010. Now, by instruction of the executors, the contents of her cottage, including silver, jewellery, furniture, ceramics and sporting books, will feature in the next sale at Lincolnshire auctioneers Golding Young & Thos. Mawer on Wednesday, September 21. 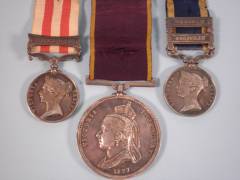 Auctioneer John Leatt said: "Lady Brassey was an accomplished artist and we are delighted to have been asked to handle the contents of her Stamford home. We expect a lot of interest in the items, in particular the Mutiny medals which are included in the sale."

Born in December 1911, Lady Brassey was the daughter of Leonard Jorgensen of Denmark. She married her first husband Lt-Col. Herbert Campbell Westmoreland (1894-1972) in 1934 and had a son Charles. She married for a second time in 1963 to become the second wife of the 2nd Baron Brassey of Apethorpe (1905-1967).

An accomplished artist working in oil on canvas, oil on paper and gouache, she was educated at Salisbury Art School and then won a scholarship to the Royal Academy School where she was awarded the silver medal. She spent many years studying with Graham Sutherland and Bernard Adams and had exhibited in galleries across the UK, the USA and South Africa.

One of the highlights of the sale is a group of three medals presented to Colonel Herbert Lowe Campbell of the 52nd Bengal Native Infantry and Bengal Staff Corps. The medals, which comprise of the Punjab 1848 with two clasps Mooltan and Goojerat, the Indian Mutiny medal 1857 with one clasp Dehli and the Empress of Indian 1877, are estimated to sell for between £2,000 and £3,000.

the regiment was annihilated by the British and 'never heard of again'. Campbell fought with his regiment in the 2nd Sikh War and was accorded the Punjab medal with two clasps, Moolton and Goojerat, and his Mutiny medal has the one clasp of Dehli. By 1877, he was the Commandant of the 9th Bengal Cavalry in which he was awarded the Empress of India medal - a medal awarded to all Colonels' Commandants.

Campbell was the longest serving commandant of the 9th Bengal Lancers for a total of 17 years. He took his regiment on the memorable expedition to Malta in 1878 but was invalided back to England in March 1880 and passed away in August 1881.

Also included in items from Lady Brassey's home is a 17th century oak draw leaf table from her living room which is estimated to sell for between £5,000 and £7,000, an early 19th century satinwood bow fronted chest of drawers with an estimate of £1,500 to £2,000 and a similar period sofa table which is expected to make between £1,200 and £1,500.

An interesting collection of sporting books includes a set of four limited edition books on British Birds, written and illustrated by Archibald Thorburn, which are an edition 44 out of 105 copies and are estimated at between £1,500 and £2,000.

In the silver section, a Victorian silver claret jug presented by Sir Robert Montgomery, the Governor of the Punjab, to Lieut. J.B. Westmoreland of the Royal Engineers as a 'token of appreciation for his services', dated 1864, is estimated to sell for between £300 and £500 and is being sold with another claret jug from the estate with the same estimate.

Items from other vendors are also featured in the sale, including a limited edition set of four 22 carat gold and two silver medallions produced to commemorate the 25th anniversary of the Atlantic Charter 1941 to 1966 which are expected to sell for between £8,000 and £10,000.

A 19th century Swiss musical box has an estimate of between £400 and £600 and a sampler by Mary Kendall of Normanby School dated May 3, 1823, is expected to sell for between £100 and £200. A longcase clock by David Patterson of Sunderland is included in a selection of four longcase clocks in the sale and has an estimated of between £1,500 and £2,000 and there are also various collections of Lincolnshire and other related postcards.