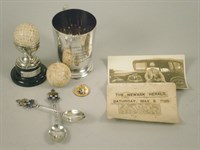 Golf balls, trophies and medals from Southwell Golf Course, near Newark, in the 1920s and 1930s have been auctioned in Lincoln.

The collection of items once belonged to George Cholerton who was manager of the Southwell Lace Mill in the early part of the 20th century. His prized items of golfing memorabilia featured in the sale at the Lincoln auction rooms of Golding Young & Mawer on Wednesday (July 17).

Auctioneer John Leatt said: "George Cholerton was a prominent member of the community in Southwell and a member of the Southwell Golf Club. He was obviously a good player as among the collection we had trophies relating to two holes in one and tournament winner's medals.

"These items particularly appealed to local collectors and those interested in sporting memorabilia and we received a great deal of interest on sale day."

The collection includes two golf balls and a trophy relating to two holes in one achieved at the Southwell Golf Course in 1920 and 1934, two enamel spoons holding the Golf Club emblem and a nine carat gold golf tournament winner's medal which sold for £300.

During the Second World War, the golf course Mr Cholerton would have played on at Southwell was turned into allotments for local people. The current Southwell Golf Club and Course was established in 1993 on the site of the Southwell Racecourse, two miles from Southwell and five miles from the market town of Newark.

In the same sale, a modern cello, dated 1991, by Robert Cain, who is a well-known maker and lecturer at the Newark School of Violin Making, made £2,400 against an estimate of between £1,000 and £1,500. It was sold to a collector from the East of England.