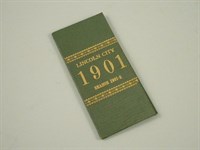 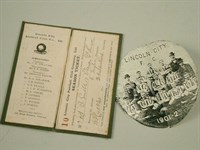 The 1901-1902 season ticket was one of the earliest known to have come onto the market when it was sold at auctioneers Golding Young & Mawer on Wednesday, June 19.

After fierce competition between local collectors in the room and a commission bid from a collector in the Middle East, the season ticket was finally bought by Chairman of Lincoln City Football Club Bob Dorrian for £120.

"Secondly, the 1901-1902 season was Lincoln City's most successful ever season where we finished fifth in the Second Division, which is now the Championships, and got to the last 16th in the FA Cup.

The season ticket had been brought into one of the auction house's free Friday morning valuation clinics and was estimated to sell for between £40 and £60.

Auctioneer John Leatt said: "We are absolutely thrilled that the season ticket has been sold to a local collector and that it will stay in the county."

Before the sale, he said: "The season ticket had been inherited by the vendor from her mother who was a life-long Lincoln City fan.

"We have never handled such a rare season ticket before. Quite often, Lincoln City Football Club programmes will appear on the market but it is almost unheard of for a season ticket to appear as they were often thrown away at the end of each season."

The season ticket was issue number 10 and was signed by W. Halkes, one of the directors of the football club. At that time, the club chairman was J. H. Strawson and the treasurer was a Mr Taylor.

Lincoln City Football Club was officially formed as an amateur association in 1884, even though it had been playing as a team from the 1860s. The club turned professional between 1891 and 1892 when it won the Lincolnshire Senior Trophy for the second time in five years.

Between 1892 and 1893 the club was one of the founder members of the Second Division and in 1895, it moved to Sincil Bank from the John O'Gaunts ground.

In the 1901 to 1902 season, the club achieved its best ever League position to date - fifth in the Second Division. The Imps reached also reached the last 16 of the FA Cup - another achievement that has never been equalled - eventually losing to Derby County.

Another hotly contested item in the sale was a 19th century French ormolu and Sevres porcelain clock garniture, which attracted five telephone bidders and another on the Internet to sell for a hammer price of £6,000. The clock garniture, which had an estimate of between £1,500 and £2,000, was consigned from a vendor from Louth as a result of a specialist valuation day at Louth's Kenwick Park.

Auctioneer Mr Leatt said: "Individual clocks have come onto the market before but it is unusual to have the candelabra with it and to find it in such good condition."

A mid-19th century Italian micro-mosaic panel, which had been entered into the sale from a deceased estate near to Lincoln, sold for £4,400 to an Internet commission bidder who was bidding against a telephone bidder from Italy.

In January this year, a mid-19th century Italian tortoiseshell snuff box with a micro-mosaic panel top sold for £4,000. The box attracted fierce competition from international collectors during the auction and was finally bought by an Italian collector bidding over the phone.

An artist's aerial view in watercolour of the Lincoln city centre, consigned by a local collector, sold for £50. The painting, which shows the city from St Marks Railway Station in the south to Newport Arch in the north, is believed to date from the 1930s.

A late 19th to early 20th century Lincolnshire Regiment helmet complete with silver plated fittings, badge and characteristic spike on top sold for £240. This 'rare survivor' had been consigned by a local collector.

A collection of medals awarded to a Sergeant G. E. Hawkins of the Durham Light Infantry sold for £750. The medals, which had been consigned by a relative from Lincoln who felt it was the right time to pass them on to a collector, were sold with various items of memorabilia belonging to Mr Hawkins including a first aid box, a sling, field dressings and papers relating to his wartime career.