Private pocket watch collection sold for nearly £5,000 in the May sale at the Lincoln auction rooms

The collection, which included examples by Lincolnshire watch makers such as Kelly of Louth, George Barnes of Gainsborough and Jackson of Spilsby and other makers including John Erade of London, was sold at auctioneers Golding Young & Mawer on Wednesday, May 15 in approximately 50 lots. 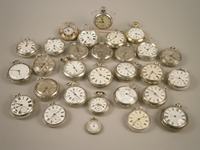 The highest price paid at the sale was £420 for a William IV silver cased pocket watch, made in London in 1837, with Masonic symbols to the dial.

Auctioneer John Leatt said: "This was a well selected collection of pocket watches which appealed not only to collectors from Lincoln and Lincolnshire but to those from a wider area.

"Several buyers travelled considerable distances to attend the auction due to the quality, and large numbers, of pocket watches in the sale."

Elsewhere in the sale, in excess of 50 lots of stamps, including 40 from a local deceased estate, sold for £13,000. Numerous collectors and specialists in the room competed with bidders on the Internet for the stamps which included those from Canada, Australia, New Zealand and the West Indies. Among the collections, a number of Edward VII stamps from Antigua made £2,100, an 1892 set from Barbados made £1,350 and two albums containing good Commonwealth stamps sold for £1,000.

A female Blackamoore figure sold to a buyer from Holland for £900 and a 19th century Staunton chess set made by Jacques and Son of London in its original box made £900 against an estimate of between £150 and £250.

A large section of furniture included a large Victorian rosewood and gilt metal display cabinet which sold for £900, a Chippendale period chest of drawers which made £750 and a William IV rosewood extending dining table which sold for £1,000.

A small collection of hunting memorabilia, including spurs, riding boots and riding crops, which previously belonged to the famous race horse trainer, jockey and hunter Jock Day made £85. Mr Day died whilst hunting with the Cottesmore Hunt in 1963.