Visitors to the Lincoln auction rooms will be taken back to the golden age of cruise and steam liners when a collection of memorabilia goes under the hammer.

Photographs of the Titanic's maiden voyage, a brochure commemorating the launch of the Mauretania and a poster of the Queen Mary will be among the 240 lots featured in the sale at auctioneers Thomas Mawer and Son of Portland Street, Lincoln on Saturday, June 5.

Buyers will also have the chance to bid on around 60 original posters, other watercolour and oil paintings, as well as menus, luggage labels, parts of ships, commemorative books handed to passengers on board and reference material.

Auctioneer John Leatt said: "These items represent a bygone age from the early part of the 20th century when cruises and steam travel were highly fashionable.

"The vendor gathered the collection over many years and it is certainly quite unusual to have such a large amount of printed ephemera on ocean liners in one sale.

"We predict the posters will attract the highest bids however some of the printed material, like the presentation brochures given to guests at the launch of The Mauretania and the Queen Mary, will also be highly sought-after because of their rarity.

"We are already receiving interest from national and international collectors of maritime memorabilia." 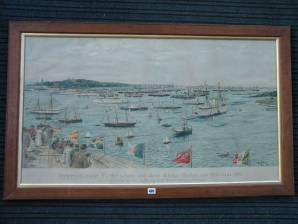 The most valuable poster in the sale is a vividly coloured print, dated 1895, after Fritz Stoltenburg depicting various ships at a show in a harbour. It is expected to fetch between £300 and £500.

There is also a pair of original 1940s designs for book dust jackets by the famous railway and steam engine artist Frank Mason titled 'The Big Blockade' and 'The Sea Raider'. The artworks are estimated to fetch between £100 and £200 for the pair.

Meanwhile, six lots of Titanic memorabilia are expected to attract the attention of collectors. An original framed photograph of the ship sailing past the Isle of Wight on its maiden voyage from Southampton is later inscribed with the fact that the ship was wrecked on an iceberg.

There is also an original programme of a concert and exhibition held shortly after the Titanic sank in aid of the Titanic Relief Fund, which was held at the London Hippodrome on April 30, 1912. Including photographs of the performers and the organiser's signature, the programme is expected to fetch between £50 and £100.

Over 1,000 postcards of ocean liners and merchant ships will be divided into 60 lots and include some of the Titanic and the Lusitania which was torpedoed during the First World War. There are also postcards from ocean liner companies in Japan, New Zealand, Canada, America, Holland, France, Scandinavia and South America.

The vendor, who asked not to be named, put together the collection over 30 years. He said: "As children, we used to go down to my grandparents in Bournemouth by train and travel past Southampton docks where the Queen Mary, Queen Elizabeth and the United States liners would be docked.

"These wonderful large ships fascinated me and I thought I'd like to go on one myself one day. I got my chance years later when we went on the QE2 across the Atlantic.

"About 30 years ago, I started thinking I'd like to have a book or a picture of a liner as well. I went round antique sales and bought memorabilia like menu cards, ashtrays, books, pictures and posters, and other items sold on board the ships to passengers.

"I particularly like the posters and the promotional brochures showing the ships and their interiors from the 1910 to the 1960s. It is wonderful to see the different styles of saloons, bars, lounges and dining rooms from the different eras."

He added: "The collection has been on display in an attic bedroom for years but now we are downsizing, it has to go."

A full catalogue will be available on-line a week before the sale. For more information phone Thomas Mawer and Son on (01522) 524984 or visit www.thosmawer.com