A collection of model railway locomotives and carriages fetched almost £2,500 in the August sale at the Lincoln auction rooms. 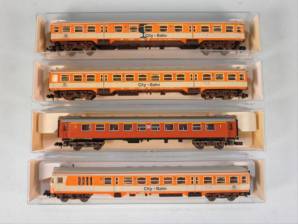 Railway enthusiasts turned out in their droves to bid for over 50 model buildings and over 100, mainly German, N-gauge locomotives and carriages by Fleischmann, Arnold, Roco and Lima when they went under the hammer at auctioneers Thomas Mawer and Son of Portland Street on Saturday (August 5).

A total of £2,435 was paid for the lots, with a further £478 achieved for another collection of over 20 Hornby 'OO' gauge locomotives, including models of The Mallard and The Flying Scotsman.

Auctioneer John Leatt said: "We expected a lot of interest in these models before the sale as they were of high quality and mostly in original condition. Bidding was fierce from several serious collectors in the room and we are delighted with the price achieved for our vendor."

In the same section, a quantity of composition model World War II soldiers and accessories, mostly by Elastolin and Duro, including men with machine guns and nurses, made £340.

Meanwhile, a pair of Victorian relief moulded jugs by Ridgway and Abington of Hanley in Stoke-on-Trent fetched £130. The jugs, which were two out of a graduating set and depicted a slave auction complete with poster stating 'Being auctioned this day - prime lot of healthy Negros', were estimated to fetch between £60 and £80. This slavery-related design, based on the Harriet Beecher Stowe book, was originally published by Ridgway and Abington in January 1853.

A pair of Victorian stoneware vases, one with cat head mask handles and the other featuring goat head handles, also fetched £130. The vases had been acquired by the owner from the Crystal Palace in London and had suffered bomb damage during the Blitz.

In the bygones section, an extensive album of Lincolnshire postcards, including those of Boston, Woodhall Spa, Gainsborough, Sutton-on-Sea, Skegness and Mablethorpe, made £190, well over the £50 to £100 estimate. A naval dress sword with a leather and brass scabbard hilt, ivorine handle and engraved blade fetched £420.

Various Victorian, Georgian and other coins and banknotes, which had been estimated to fetch between £50 and £100, made £380, whilst a Victorian painted tin hat box and various textiles, including a fur coat, made £500. A quantity of mainly costume jewellery, but also including some silver and gold, in a Victorian black leather jewellery box with gilt borders fetched £700.

A mahogany baby grand piano by Boyd of London which was sold with a mahogany piano stool fetched £320.

In the furniture section, an Edwardian mahogany card table which featured a built-in roulette wheel fetched £850, well over its £200 and £300 estimate.

Entries are now being invited for the next specialist fine art sale which will be held on Friday and Saturday, October 1st and 2nd and will be combined with the regular monthly auction. Buyers will be able to view the sale and bid on-line via a live bidding system. The closing date for entries is Friday, September 3.

The next sale will be held on Saturday, September 4. A full catalogue will be available on-line a week before the sale at www.thosmawer.com . For more information phone Thomas Mawer and Son on (01522) 524984.