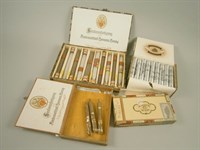 Cigars removed from the cellars of the home of Hitler's deputy at the end of the Second World War will go under the auctioneer's hammer in Lincoln.

The full and part box of cigars, which had been specially made for Reichsmarshall Hermann Goring, will be sold in the next sale at Lincoln auctioneers Golding Young & Mawer on Wednesday, August 21

Auctioneer John Leatt said: "These cigars were specially made for the Fuhrer's deputy and, by the vendor's family repute, were removed from the cellars of his home in Brandenburg, near Berlin, after the end of the war. They have been consigned for sale by a local private vendor who inherited them from a relative.

"These unusual items are in untouched condition and are certain to attract collectors of cigars and Third Reich memorabilia. We estimate they will sell for between £800 and £1,200."

Goring was groomed as Hitler's successor and lived a lavish lifestyle, often entertaining guests at his grand manor house in Schorfheide Forest in Brandenburg, near Berlin. He was often seen with a glass of wine and a cigar in his hand.

As Luftwaffe commander-in-chief, he was humiliated by the RAF's destruction of cities such as Cologne and Hamburg and in 1946, after being found guilty of war crimes at Nuremburg, he committed suicide with a cyanide capsule.

The same sale also contains a collection of 20 pistols and other items of militaria consigned by a local vendor, a collection of tribal art, playing cards, clocks including mantel and longcase clocks and studio pottery.