Local and international buyers flocked to the February sale at the Lincoln auction rooms ensuring high prices were achieved for the most sought-after items.

The auction, held on Saturday (February 6), was declared 'especially busy' by auctioneers at Thomas Mawer and Son of Portland Street, Lincoln.

Auctioneer John Leatt said: "The sale was especially busy and we noticed the room was full with quite a lot of new buyers to the saleroom. Competition between international and local buyers ensured many of the lots made particularly good prices, especially some of the furniture."

Among the lots, a collection of scent bottles, paperweights and studio art glass, including examples by John Ditchfield, Caithness limited edition scent bottles as well as those by Swedish and Italian glass makers, were expected to catch the attention of collectors. The entire collection, gathered together by a vendor from Louth, outstripped estimates of between £200 and £400 to make a total hammer price of £453.

Among the lots, the highest amount of £120 was paid for a lot of various coloured and blue glass scent bottles and a blue shaped vase by the artist Alvar Aalto dated 1995 fetched £28.

Elsewhere in the sale, a Minton 'Haddon Hall' dinner service fetched £440, well above its £200 to £300 estimate, and another tea, coffee and dinner service in a 'Ming Rose' design by Coalport made £400 and was bought by a buyer from Brighton.

Mr Leatt said: "The excellent prices achieved for these two dinner services prove there is still a high demand for good quality dinner services by the very best of English makers."

In the silver, a George V coffee pot made in Sheffield in 1927 fetched £200 and a Victorian silver gilt snuff box in immaculate condition with no rubbing to the hallmark or decoration fetched £320 and was bought by a Louth-area buyer.

In the furniture section, two pieces of 19th century carved oak were both bought by an American buyer. An English hall stand decorated with masks, scrolls and fruit, which was estimated to fetch between £150 and £250, made a hammer price of £300, and a Continental buffet decorated with flowers, leaves, scrolls and dead game fetched £360.

Mr Leatt added: "These pieces were particularly good examples of 19th century carved oak. The carving is good quality and both still have a function in the present day." 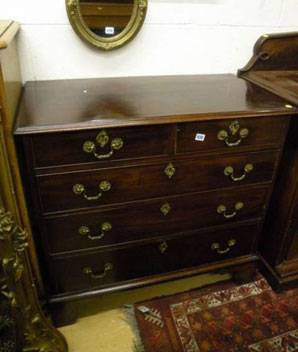 Ten 19th century spindle back kitchen chairs in good condition were bought by a buyer from Lincoln for £350, an Edwardian mahogany and inlaid display cabinet in immaculate condition fetched £420 and a Victorian mahogany mirror-backed four door sideboard fetched £380.

Meanwhile, a very elaborate Victorian gilt over mantel mirror fetched £350 despite the fact it needed some restoration. It was bought by a specialist collector from Surrey.

The next sale, which features a collection of railway memorabilia including archive material, plans, posters, model railway books and other related items, will be held on Saturday, March 6.