A collection of over 100 di-cast vehicles amassed by a local man over the last 10 years will go under the auctioneer's hammer in Lincoln.

The unusual collection, which includes examples of Corgi and Dinky vehicles and those from other manufacturers, many in their original boxes, will be sold at Lincoln auctioneers Golding Young & Mawer on Wednesday, October 16.

Auctioneer John Leatt said: "This is one of the most interesting collections of di-cast vehicles to come onto the market in the local area for some time. It is very unusual to see such a well-selected collection, many of which are in almost immaculate, complete condition."

The highlight of the collection is a Corgi Chipperfield's Circus Gift Set No. 21 complete with all the packaging including cellophane wrapping on the accessories which is estimated to sell for in excess of £400. 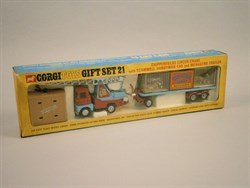 Elsewhere in the sale, an early 20th century fireman's hose nozzle, which was previously used in Marshall's Engineering Works in Gainsborough, is estimated to sell for between £50 and £100. It has been entered into the sale by a relative of one of the former employees.

An unusual early 20th century log book for Hewitt's Brewery of Grimsby, which includes records for numerous pubs in Grimsby and others across Lincolnshire and North Nottinghamshire, is estimated to sell for between £100 and £200. Consigned by a local collector, the log book is a unique record of the pubs, their rents and licence agreements for establishments including The Black Boy in Lincoln and The Black Head in Gainsborough.

There are also over 50 Lladro figures, a collection of over 50 pieces of Moorcroft pottery including a very early biscuit box and cover with an estimate of over £400, several lots of jewellery including gold chains, an Austrian Art Deco style bracelet, coins and medallions, over 30 Caithness paperweights and early Staffordshire figures.