Bygone ephemera from local historian's collection go under the hammer

Many people will have enjoyed reading the late-local historian Lawrence Elvin's series of books, 'Lincoln as it Was'.

Now visitors to the auction rooms of Thomas Mawer and Son of Portland Street will have the chance to step back in time once again when bygone items from his collection and others go under the hammer on Saturday, March 6.

Auctioneer John Leatt said: "We are delighted to be able to offer items from the collection of Mr Elvin. He was a well-known local historian with a keen interest in the city's heritage and we are sure these items will attract the attention of today's local history collectors."

Among the collection is a series of ephemera relating to Mr Wilson Blaze, a baker with premises at Burton Road, Lincoln. A copy of his Shop Licence from the Inland Revenue Office dated October 1890 shows he had a wholesale and family grocers shop at 23 'Bail Gate' and a warehouse at 111 Burton Road where he retailed and wholesaled corn, flour and offal. He was also sole agent in Lincoln for ales and stout from the Newark brewery of R. Warwick and Sons.

A series of fascinating bill receipts detail other businesses in the city and beyond that Blaze traded with. There are bill heads dated 1891from Henry Kirk White who was manufacturing confectionary from premises at High Bridge on the High Street and T. Walton Wholesale and Glass Retailers of Staffordshire House near Great Northern Station, St Mary's Street dated December 6th 1889.

The collection also includes copies of books such as the 'History of Co-operation in Lincoln 1861-1911' by E.I. Abell and J.D. Chambers, 'A Lincolnshire Guide Book' by Mansel Symspon dated 1913 and other books and souvenirs from Ruston and Hornsby.

There is also a receipt from the Classical School, Mount Pleasant, Sleaford which shows that Mr Lamb paid 11 pounds, five shillings and two pence for one terms board and tuition up to Christmas 1878, including washing and mending and haircutting, for his son Master C. Lamb. It also states that 'the school will be re-assembled on Monday the 27th January 1879 when punctual attendance is respectfully requested'.

Local historian Lawrence Elvin worked as a Local Studies Librarian at the Lincoln City Libraries Department from the 1960s. A skilled photographer, he built up an archive of photographs of the city, including its streets, buildings, railway station, churches and local dignitaries. Many of these photographs were published in his series of four 'Lincoln as it Was' books. He died in September 1995.

Mr Elvin's daughter Judith Hickingbotham, who lives in Grantham, has placed the items in the sale. She said: "My father was a collector and a rummager, and Lincoln and ephemera were his great passions.

"We decided to sell these items in Lincoln because they should stay in the city. We're sure collectors will appreciate these things just as my father once did." 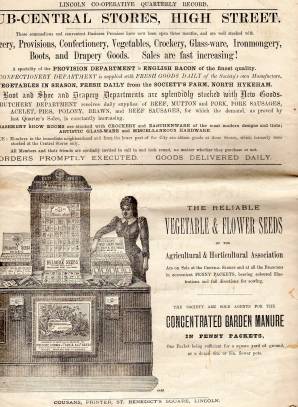 Also in the bygones section is a series of account statements for The Lincoln Equitable Co-operative Industrial Society dated 1894. The brochures show drawings of Co-op stores on Silver Street and Free School Lane and advertise the latest wares available including Concentrated Garden Manure at a penny a packet and Star Pig Meal. It also requests that: 'All members and their friends are cordially invited to call in and look round, no matter whether they purchase or not'.

There is also an album of photos of all the Lincolnshire football teams that have won the Lincoln and District Trophy Competition from 1904 to 1976. Among the pictures are the Washingborough Team in 1904, the Metheringham Team in 1905, the Bracebridge F.C. in 1910, Saxilby in 1919, Hykeham in 1923 and Heighington in 1973.

There are also three albums of postcards including some early postcards showing submarines, steam liners and warships.