Works depicting Lincolnshire and those by county artists will go under the auctioneer's hammer at the next international Fine Art sale at the Lincoln auction rooms.

Some of the most sought after works, including a series of screen prints of Harlaxton Hall by the pre-eminent British 20th century artist John Piper (1903-1992), have already received a great deal of interest before the sale which will be held at Golding Young & Mawer's Lincoln auction rooms on Wednesday, May 28 at 7pm.

Auctioneer William Gregory said: "This art sale includes some very good examples of local art and the catalogue has already brought in a number of telephone bids for the most sought after works. We are expecting a very busy evening of bidding."

Highlights of the local section of the sale include four screen prints of Harlaxton Manor near Grantham by the artist John Piper which came from a collector in Stamford. Hailed as one of the most versatile and interesting British artists of the 20th century, Piper was at the cutting edge of many elements of the British art scene. He achieved the highest respect for his works in stained glass and ceramics, his stage, set and costume designs, prints and writings.

Each of the screen prints featured in the sale is mentioned in Orde Levinson's book 'The Prints of John Piper: Quality and Experiment'. 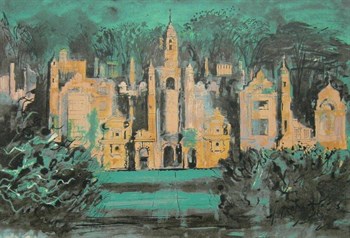 Meanwhile, there are three oil on boards of Boston including The Stump by the local artist John Grimble (? - 1997) and two watercolours by William Bartol Thomas (1877-1947) titled 'Gibraltar Point, Lincolnshire' and 'Lincolnshire river landscape' which are each expected to sell for between £250 and £350.

Works by the Lincoln father and son artists John Danby Wheeldon (1914-2008) and Robin Wheeldon (b.1945) are also included in the local section of the sale. The works by JD Wheeldon depict scenes of Lincoln and the surrounding area including Hall Top Farm at Heighington and the Wesleyan Chapel, Clasketgate, Lincoln which are signed and dated 1961, while the oil on board by Robin Wheeldon shows a crop sprayer landing at the old RAF runway at Skellingthorpe, Lincoln, with the city in the background.

Following an exhibition of original paintings and prints by the artist Vincent Haddelsey (1934-2010) at Lincoln's Sam Scorer Gallery in May, three pictures by the artist are included in the Fine Art auction, including the limited edition print 'Horse race meeting' which has an estimate of between £80 and £120.

There are also two lots by the artist Graham Hillier, who lived at Canwick, near Lincoln, including 'November Canwick' and 'April Canwick' and two signed oil on board paintings by the Grimsby artist Edwin Aldridge Haddock (1921-1996) titled 'Pirahna' and 'Abstract'. 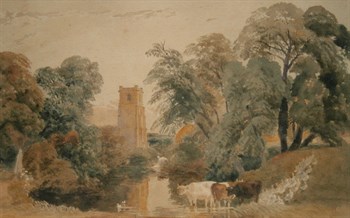 An oil on board by the Cleethorpes-born artist Peter Arthur Brannan (1929-1994) titled 'Flowers in a blue jug' and signed and dated 1993, is expected to make between £300 and £500. Brannan lived at Newark for 30 years and was a President of the Lincolnshire and South Humberside Artists.

The sale also features some interesting hunting and shooting pictures including two signed watercolours by John Cyril Harrison (1898-1985). The first is titled 'Blackgame, winter' and the second, 'In the Glade - Woodcock', and both are estimated to sell for between £800 and £1,200.

The auction commences at 7pm on Wednesday 28 May.