A stained glass window panel , which appeared on the Antiques Roadshow in November 2003, was bought by a telephone bidder for £2,000, at an auction in the Grantham Sale Room of Golding Young & Mawer on September 4. 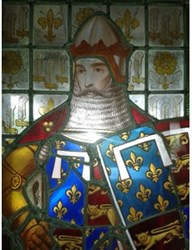 The panel (Lot 2) was made by the highly respected designer Henry Hughes and depicted Edward 'the Black Prince' in a full length pose.

It was inherited by the previous owner, and the line of descent can be traced back to 1945, when it was salvaged from the Old Rectory at Elton, in Northamptonshire, and rebuilt by Messrs Kelley & Co, Finsbury, London.

Signed and dated, the panel was produced when Henry Hughes was a principal with the London firm Ward and Hughes in 1870.