Autograph album of actors and royalty set to dazzle in Lincoln

A dazzling autograph album of actors and royalty who visited a West End theatre is set to be auctioned at The Lincoln Auction Rooms on 19th July 2017.
Working as a stage door receptionist at the Lyric Theatre on Shaftesbury Avenue from 1979 to 2002, Pauline McNally rubbed shoulders with famous actors and welcomed royalty to the theatre on a daily basis. Whenever she welcomed somebody new, she would ask them to sign her autograph book.
Her collection of signatures includes Billy Connelly, Dennis Waterman, Rula Lenska, Robby Coltrane, Simon Callow, Kenneth Branagh, Peggy Ashcroft, Bill Nighy, Mick Jagger, Eric Clapton and members of the Royal family including HRH Queen Elizabeth and Prince Phillip, Prince Edward, Prince Andrew, Princess Margaret and Princess Grace of Monaco. 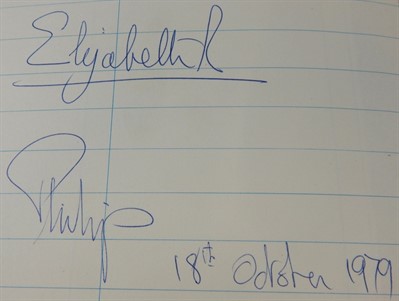 When Pauline finished working at the theatre in 2002, she was presented with the album and now it will be featured in the next Lincoln sale.
Auctioneer Colin Young said: “This autograph album represents a fascinating snapshot of the comings and goings in a West End theatre over 21 years. As the stage door receptionist, Pauline’s role was to meet and greet famous guests and their friends and she had the forethought to capture their signatures for posterity.
“The album has already created quite a buzz amongst collectors and we anticipate it will sell for over £300 on sale day.” 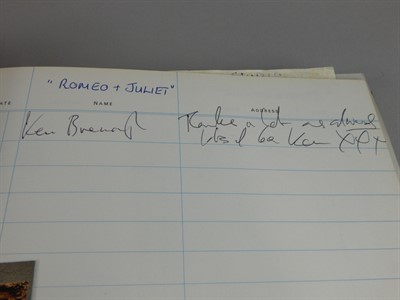 Pauline, who now lives in Woodhall Spa in Lincolnshire, worked alongside her partner Terry Clapton who was a high profile security guard for big named stars such as Frank Sinatra and The Beatles. She said: “As the stage door receptionist, I had to look after the actors when they came in for the shows and I ran the switchboard for the theatre. When the actors came in for rehearsals, I made sure their dressing rooms were fine and looked after the stage crew as well.
“Signing my book was just something I asked them to do and they were quite pleased to do it for me. When we had press nights in the theatre I would ask all the actors, their famous friends and even Royalty to sign the book. It was quite exciting and I have fond memories of working there.” 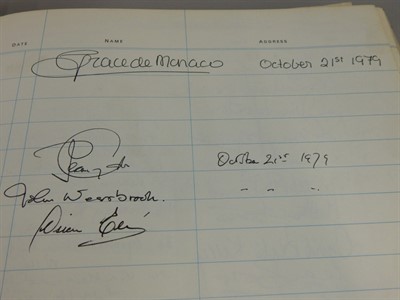 One of her fondest memories is entertaining Mick Jagger who had sponsored a show at the theatre. She said: “Rather than him going into the main bar where he would have been mobbed, he came and sat with me at the stage door. When the Rolling Stones first started, they used to perform at the Upper Island on the Thames and I mentioned it to him and he was over the moon that I’d remembered it.”
Some of the signatures are of friends of the actors who performed in the theatre. She said: “Rula Lenska was performing at the theatre and Dennis Waterman came in to see her. I asked him to sign the book. He’s not anything like he is on the telly; he’s not a Cockney at all and is really quite posh!
“Billy Connelly came in to see Mary Chapin Carpenter performing and at the end of the show when I finished work, my partner and I gave him a lift home because he hadn’t brought a car or bicycle with him.
“Robby Coltrane did a show at the Lyric before he became really famous and what a character he was! He used to drive in his Pink Cadillac and park it at the stage door and would get me to keep the security cameras on it!”
Pauline’s favourites out of all the stars she met was actor Simon Callow who wrote several entries into the book, and actors Mervin Bragg and Edward Fox who used to perform poetry readings in the studio. Pauline said: “On press nights I would have to make sure they had champagne in a wine cooler in their room. When they left they presented me with two dozen long stemmed roses in a cut crystal vase and a big box of Black Magic chocolates! I still have the vase to this day.”
She added: “Dexter Fletcher was a teenage actor when he started at the Lyric and he was quite a character, such a laugh and such a lovely boy! He was quite cheeky and rude but you put him in his place and was alright! I went to a film premier and anyone would have thought I was Royalty the way he made such a fuss of me!”
The book also contains the signatures of Joanna Lumley, Ian McKellan, Tom Courtney, Brian Glover, John Hurt, Natasha Richardson, Amanda Redman, Rupert Everett, Barbara Windsor, Tracey Ullman, Pete Postlethwaite and Richard Briars.
Pauline and her partner came across the album in a cupboard and decided to bring it to the auction rooms’ free Friday valuation clinic. She said: “It has been stuck in a cupboard for years but now it’s time for somebody else to enjoy it.”
The Collective Sale will be held at The Lincoln Auction Rooms on 19th July 2017 from 10am. Viewing is on Tuesday 18th July from 10am until 4pm, and from 8.30am until 10am on saleday.
« Back to News