Golding Young and Mawer’s sale on the 20th of May at The Lincoln Auction Rooms produced some outstanding results. The highlight was an Art Deco period diamond encrusted and enamel necessaire by the well known Parisian jewellers Lacloche Freres. It was consigned from a client overseas and guided by senior valuer John Leatt to an estimate of £4000-6000. It was undoubted quality, although not in perfect condition. After huge amounts of enquiries on the internet, it was left to the telephone bidders on the day to battle it out. After a fierce bidding war it was finally sold to a London specialist for £12,000. 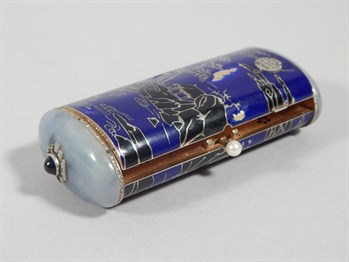 As this year is the bicentenary of the Battle of Waterloo there has obviously been a huge amount of interest in pieces relating to The Duke of Wellington’s great victory. A collection of archive material including personal letters, diary notes, newspaper cuttings and in particular a group of invitations to Wellington’s funeral were consigned by a local collector. He had acquired them some years ago and in the process of downsizing had picked just the right time to enter them on to the open market. The items mainly related to Sir George Scovell (1774-1861) who was not only one of the officers with Wellington at Waterloo, but latterly an Aide de Campe (personal assistant) to King George IV and the Governor of Sandhurst Military College. The items sold within 27 lots all relating to the Scovell family and the collection totalled over £3500. The highest price of £550 was paid for a group of letters and personal ephemera relating to Sir George, including a lock of hair from the charger he actually rode at the battle of Waterloo. Also amongst an interesting militaria section was a pair of swords, formerly belonging to Henry Nelthorpe of Scawby Hall in North Lincolnshire, which made £1500.

Other highlights of the sale included a three carat diamond ring that sold for £3400. £2000 was paid for a collection of five mid 19th century bank notes, all issued by the Macclesfield and Cheshire Bank, including a very rare £100 note (sold for £1100). Three pieces of tribal art also made significant prices in the sale. £1500 was paid for an Aboriginal shield, £400 for a 19th century Aboriginal nail club and £400 for a New Caledonian club. Auctioneer Colin Young said, ‘Again, quality items produced some exceptional results over and above what is already a great time to sell.’