Antiques from yachtswoman, the Lady Rozelle Raynes, the heiress of Thoresby Hall, Nottinghamshire to be sold at auction

Antiques and personal effects from the estate of the late Lady Rozelle Raynes, the heiress of Thoresby Hall, Nottinghamshire, will be sold at auction in Lincoln.

The daughter of an earl, Rozelle rejected expectations that she would become a debutant and socialite and instead devoted her life to the sea, becoming a famous yachtswoman.

During her lifetime, she joined the Wrens during the Second World War, sailed around the Baltics in her yacht the Martha McGilda and set up a charitable trust teaching East End boys in care sailing in the London docks. She also wrote several books about her experiences including Maid Matelot (published in 1971) in which she recalled she was fascinated with the sea even as a small child.

Although she grew up in Yorkshire and lived in London, she kept a close association with the Thoresby Estate, returning to live in Butterfields, a house she and her late husband Dick Raynes had built on the estate, for the last five years of her life.

Sadly Rozelle died in her sleep on June 22nd, 2015, aged 89. Now her personal effects, including antiques from the family home Thoresby Hall in Nottinghamshire will be sold at The Lincoln Auction Rooms of Golding Young & Mawer on Wednesday, February 17th.

Among the items are scale models of Rozelle’s yachts, the Martha McGilda and The Flip McGilda, which were previously on display in her home; there are also collections of militaria including two blunderbuss and a pepperpot pistol, collections of porcelain including Sevres, Meissen, Royal Copenhagen, Lalique glass and Swarovski crystal figures. 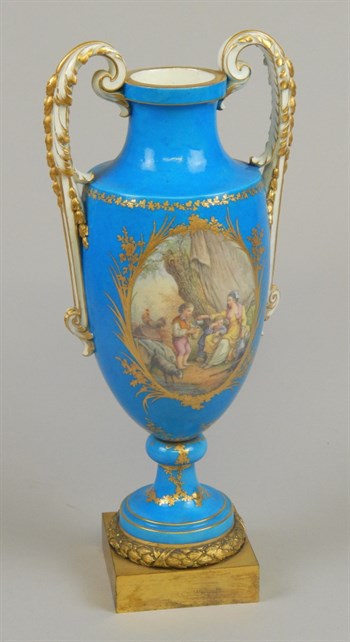 Of particular note among several items of silver made by Asprey and other eminent makers is a rare 18th century novelty silver creamer in the form of a dog, probably a Mastiff. 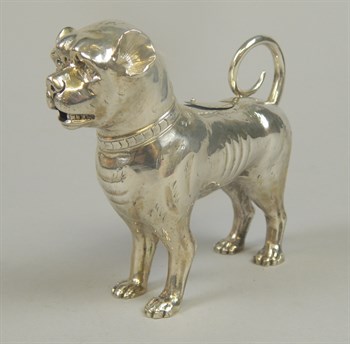 There is also an inkwell made from brass salvaged from the surrendered German battleship The Helgoland in 1922. 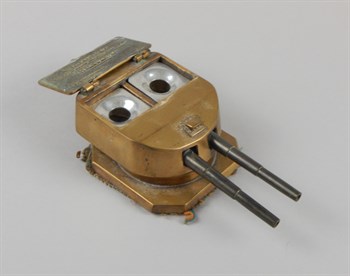 A number of paintings of yachting scenes from Rozelle’s collection of 19th and 20th century art will be included in a separate evening art sale of 200 lots at The Lincoln Auction Rooms starting at 6pm on the same day. It will include an oil on canvas of a yacht off the coast by David James, which is signed and dated 1887 and expected to sell for between £400 and £600, and a pencil sketch titled ‘Thames Barges at Greenhill’ by the artist Montague Dawson. There is also a signed watercolour titled ‘Sailing Barges at Gravesend’ by Norman Wilkinson which is estimated to sell for £300 to £500.

Auctioneer Colin Young said: “It has been such a delight to see, value and in many cases sell such a diverse selection of artefacts that reflect a full and varied life. Early automobilia, marine items, weaponry, ceramics, fine paintings and period furniture were all an integral part of her home.”

Born Lady Frederica Rozelle Ridgway Pierrepont on November 17th 1925, Rozelle as she was known, was the daughter of Gervas Evelyn Pierrepont MC. Her father succeeded a cousin to become Earl of Manvers in 1940 when the family moved to the family seat of Thoresby Hall in Nottinghamshire.

The Pierreponts, at one time Earls and Dukes of Kingston, have been associated with Thoresby since the mid-17th century. The first mansion house was built in 1670 and was later destroyed by fire in 1745. In the 1760s, a new house was built on the site to designs by John Carr of York. The Carr house was pulled down in 1865 to enable a vast mansion by Anthony Salvin to be built in its place.

Rozelle’s mother was Marie-Louise Roosevelt Butterfield, an artist and only offspring of Sir Frederick and Lady Butterfield who owned Cliffe Castle in Keighley. The surname ‘Roosevelt’ was taken from her maternal grandmother who was a relative of Theodore Roosevelt.

Soon after moving to Thoresby Hall, it was requisitioned by the army and her experiences at that time encouraged Rozelle to join up and become a Wren aged 18 in 1943. She was appointed stoker on a tug moving men and signals around Combined Ops bases in Portsmouth. It was a time which she recalled feeling she had ‘reached the ultimate peak of happiness in all my 18 years.’

In June 1944, Rozelle watched the invasion fleet leave for Normandy and days later witnessed the first German prisoners-of-war arriving on the south coast.

After being demobbed, Rozelle Pierrepont worked as a deck hand on a 100-ton Bermudan cutter and later, on her 21st birthday, she was given a converted ship’s lifeboat by her mother in which she sailed around France, Holland and Belgium.

She bought a 25 foot folkboat named Martha McGilda in 1956 and cruised the Baltic, then sailed single-handedly from Dover to Finland, writing an account of her journey in Yachting Monthly.

She married Major Alexander Beattie of the Coldstream Guards in 1953, divorcing him eight years later. She later found love with Richard Raynes, a doctor who she married in 1965; the couple lived at Limehouse Reach in East London.

In the 1970s she began a social experiment, seen as bold at the time, to teach boys living in care in the London Borough of Newham (where her husband worked as a deputy medical officer) to sail. Every fortnight she would take the boys out on the River Thames on the Martha McGilda. A report from the director of Social Services in 1976 started that there was a ‘marked change for the better in the boys’. She wrote an account of the project in her book, The Tuesday Boys, which was published in 1991, and in 1980, she set up the Martha McGilda charitable trust to continue the work.

Rozelle had inherited the Pierrepont estates on the death of her father in 1955 and on her mother’s death in 1984, Thoresby Hall was sold to later become a hotel. But Rozelle always kept a close interest in the estate, making many friends there and teaming up with local volunteers to rescue families from wartorn Yugoslavia.

Viewing for the Lincoln Collective Sale will be open from 10am to 4pm on Tuesday 16th February 2016 and from 8.30am on the day of the sale.