A menu card signed by Manchester United players who lost their lives in the Munich Air Disaster, and some who survived, looks set to go under the auctioneer’s hammer in Lincoln.

The card, which has been entered into the sale by the family of player David Pegg who was among 23 people who died in the tragedy, will feature in the next auction at Golding Young & Thos. Mawer on Wednesday, October 19. 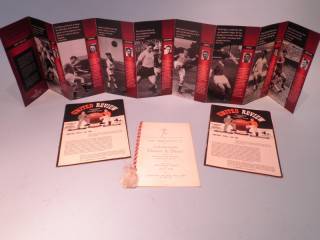 Auctioneer John Leatt said: "The year before the Munich Air Disaster, David Pegg's mother attended a celebratory dinner for the Manchester United players at the Savoy Hotel and collected the autographs of some of the players on a menu card.

"Tragically, the following year her son and several other members of the team died in the disaster. The family have kept the menu card for over 50 years but now feel the time is right to sell it.

"We expect a great deal of interest in this unique piece of sporting history and estimate it will sell for between £400 and £600."

Twenty-three out of 30 passengers died when the plane, carrying the Manchester United team, club officials and journalists back from a European Cup tie against Red Star Belgrade, crashed at the Munich-Reim airport on February 6, 1958.

The autographs on the card include those of players Duncan Edwards, Eddy Colman, Mark Jones, Roger Byrne and David Pegg who died in the disaster and Dennis Viollet, Jack Blanchflower, Ray Wood and Harry Gregg who were injured.

It is being entered into the sale along with two match programmes for the FA Cup Fifth Round Game in 1958 at Old Trafford; lists of memorial services to be held around Manchester can be found on the back of the programmes.

Elsewhere in the sale, a collection of autographsfrom famous recording artist of the 1960s and '70s are expected to sell for between £1,000 and £2,000. Groupies can pick up the signatures of The Jackson Five including Michael Jackson for an

There are also autographs of Gene Vincent, Eric Clapton's band The Yardbirds, The Searches, Gerry and the Pacemakers, The Bachelors, The Eagles, The Kinks and Dusty Springfield.

Meanwhile, an early William Moorcroft stoneware jug decorated with fish, which was consigned by a collector from East Yorkshire, is expected to sell for between £800 and £1,200.

The first lot in the sale - a cold painted bronze inkwell by the well-known Austrian maker Franz Bergman - was discovered during a routine valuation call to a house near the centre of Lincoln. The inkwell, which is in the form of an Arab boy with hookah pipe, is estimated to sell for between £600 and £800.

A group of medals awarded to a Polish soldier, Private Aleksander Gudowski are expected to sell for between £300 and £500. The medals include the Polish War Medal, the Cross for Monte Cassino, the 1939-45 Star, the Italy Star, the Defence Medal and the 1939-45 Medal.

The battle at Monte Cassino was one of the toughest battles fought in Western Europe during the Second World War. Over four months, an estimated quarter of a million allied troops died or were wounded as they fought their way up from Southern Italy towards Rome and the monastery of Monte Cassino stood at the strongest point of the German defensive.

A collection of ephemera, including early 20th century photographs and blueprints of traction engines made by Clayton and Shuttleworth, Lincoln, is expected to make £100 to £200 in the sale. The lot also includes catalogues for the Art and Industrial Exhibition held in Lincoln in November 1910, a series of magazines from Lincoln Higher Elementary School in 1907 and a copy of Ruston at War 1939 - 1945.

The most unusual lot in the sale is a 16ft by 6ft part of the stage set of comedian Bill Bailey's Remarkable Guide to the Orchestra held at the Royal Albert Hall on October 15, 16 and 17, 2008, which is being sold with a signed, screen printed, limited edition poster from the same show.

Within a small section of taxidermy, a giant tortoise, discovered in a house in Lincoln, is expected to make between £80 and £120 and a brook trout weighing in at seven pounds and one-and-a-half ounces in a fitted case is estimated to sell for £80 to £120.