A huge diamond ring is sure to set hearts a-flutter when it goes under the hammer in the August sale at the Lincoln auction rooms.

A huge diamond ring is sure to set hearts a-flutter when it goes under the hammer in the August sale at the Lincoln auction rooms.

Described by auctioneers as the 'ultimate engagement ring', the solitaire diamond ring features a romantic heart shaped setting and is expected to sell for between £5,000 and £6,000 in the next sale of antiques, collectables and estate clearances at auctioneers Golding Young & Thos. Mawer on Wednesday, August 17. 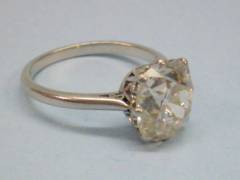 Auctioneer and jewellery expert Jan Squires said: "This is the ultimate engagement ring!" It is an unusually large size for a solitaire and features a cushion-shaped old brilliant cut stone rather than the modern round brilliant cuts of today's rings.

"It is the first lot in the August sale and we are expecting a lot of interest in it, particularly from those with romance in mind!"

The gold and jewellery section also features a highly sought-after Brietling Avenger Seawolf automatic watch on a brick link bracelet with box and papers which is estimated to sell for between £1,000 and £1,500 and a gentleman's 18 carat gold Omega Constellation Automatic Chronometer watch on a mesh bracelet has an estimate of between £1,500 and £2,500.

partner's desk, both consigned from a collector in Grimsby, are estimated to sell for between £800 and £1,200 each.

A strong clock section includes a longcase clock with a painted dial by J. Watson of Market Rasen, which has an estimate of £800 and £1,200, and four good late 19th century French carriage clocks by Henry Jacot are expected to sell for prices ranging from £500 to £800 each to in excess of £1,000.

There is also a large collection of silver cutlery, salvers and silver tea services, as well as collections of Royal Doulton, Beswick, crested china, Royal Albert and Swarovski crystal.

An Art Auction featuring a good selection of 19th and 20th century art, as well as those from the European School, is being held at the Lincoln saleroom on Wednesday, September 28 at 7pm. Entries are still being accepted until the end of this month.

Highlights of the sale so far include a watercolour landscape by Peter De Wint (1784-1849) and a painting of the Mousehole in Cornwall by Anderson Hague which are both estimated to sell for between £1,000 and £1,500. There is also an early 20th century painting of a masted ship by Patrick Downie with an estimate of £500 to £800.

Several paintings by Lincoln artists include a figural study by Tony Bartle which is expected to sell for between £200 and £300, a painting of Steep Hill by Keith Roper which has an estimate of £50 to £80 and a 1980s futuristic painting by Peter Lightfoot has an estimate of between £80 to £120.