A pair of 19th century pistols Barber of Newark are expected to attract a lot of interest when they go under the auctioneer's hammer in Lincoln.

The small pistols made by Barber feature silver inlaid handles and will be featured in the next sale on Wednesday, March 25. 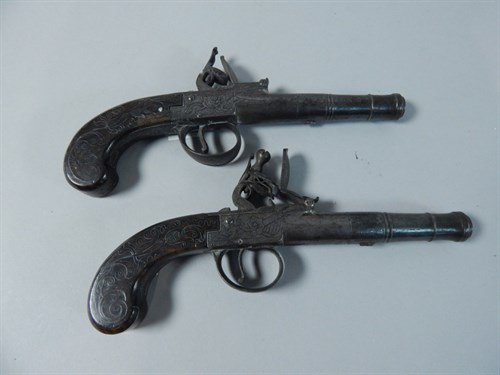 Auctioneer John Leatt said: "The pistols were brought in to one of our valuation days by a collector from Lincoln and are in wonderful untouched condition. We estimate they will sell for around £200 to £300 on sale day."

A pair of similar pistols, which were used by an officer at the Battle of Trafalgar, are held at the Whitby Museum.

Meanwhile, two sets of Crimean War medals from different vendors are expected to sell for between £600 and £1,000 each. The medals were awarded to Gunner Andrew Hook of the First Troop of the Royal Horse Artillery and Private Thomas Genders of the Grenadier Guard's Third Battalion.

Mr Leatt said: "It is unusual to have two very similar sets of medals featuring the same bars in the same auction."

Within a collection of 50 lots of ephemera, there are a number of items relating to South Yorkshire coal pit disasters, Doncaster Race Course, the railways and various manufacturing industries throughout Yorkshire, Lincolnshire and Nottinghamshire.

One lot features memorial handkerchiefs, photographs showing the floral tributes at the colliery and a certificate relating to the Bentley Pit Disaster which happened on November 20, 1931.

The handkerchiefs were made in 'Affectionate Remembrance of the Miners who lost their lives' in the disaster and state that they were buried in Arksey Cemetery, near Bentley on November 25, 1931. The names, ages and addresses of each man are listed and there is a message from the King which reads: 'The Queen and I are shocked to hear of the disaster at the Bentley Colliery, and send our heartfelt sympathy to those who have lost their lives so tragically.' Mr MacDonald, the Prime Minister, also sent a message of sympathy.

An order of service, attended by the Lord Bishop of Sheffield and Reverends from various churches shows that the Bentley Colliery Prize Band played and the hymn was 'Rock of Ages'.

There is also a certificate awarded to Thomas Booker for his bravery in the Whitwick Colliery Disaster on April 22, 1898.

Another lot features a guest book from the British Women's Hospitality Committee, which by repute was a club in London exclusively for women, and includes Royal signatures of HRH Her Majesty The Queen 'Elizabeth R' signed May 6, 1941, HRH Her Majesty Queen Mary who was The Queen's Grandmother signed on February 11, 1942, and Princess Alice, the Duchess of Gloucester, dated August 9, 1940. The lot is expected to sell for between £50 and £100 and includes an album of press photographs including those of gatherings of soldiers.

The live auction will take place at The Lincoln Auction Rooms on March 25 from 10am. The full sale catalogue can be viewed online at www.goldingyoung.com. Viewing will be open between 10-4pm on April 8, and 8.30-10.00am on the morning of the sale.